As an automotive designer, you’re never gonna please everyone. It simply cannot be done and no one should ever attempt to go down that road; an artist should always be true to his vision and, in the car world, the line between designer and artist is extremely blurry. These days we get all sorts of “committee cars”, stuff that’s made to have the broadest appeal possible but that ends up being as bland and disappointing as Northern cooked Southern food; cars completely deprived of personality. Not good. So when something polarizing shows up it’s actually a great thing because at least it sparks emotion instead of fueling a yawn fest. Love it or hate it, there’s certainly no ignoring it.
When speaking of polarizing cars, there are a few names that sit right at the top of the list, the kind of stuff that often finds absolutely no middle ground; you either love it to no end or wholeheartedly hate it with a vengeance. I’m referring, for example, to the Espada, the Lagonda and the “monster” Alfa RZ.

To be perfectly honest, I love all these so it’s really no surprise that I also have a considerably soft spot in my heart for one of the most controversial of Maseratis and our focus today on AV: The Shamal (1990-1995/6). So why is this little GT so divisive? On paper it looks great: a creation from legendary Marcello Gandini (the same mind that gave us icons such as the Countach, Diablo, Miura, Stratos, Montreal and Pantera), a twin turbo V8 power plant and a very limited production run of just 369 (estimate) units. No drawbacks, right? Well, there are a few things to consider…The Shamal, named after a hot summer Mesopotamian wind but which’s name now only reminds us of a beloved “Arrested Development” gag, is an (base/style wise) evolution of the Biturbo and that car was…what’s the word I’m looking for…? Oh yeah, terrible. It looked boring, the performance was nothing to write home about and the build quality…well, it was so bad that it famously made Jeremy Clarkson feel the need to crush a Biturbo on an episode of “Top Gear”. We know Clarkson’s “reviews” need to be taken with a grain of salt (and when I say a grain, I really mean a whole bag or rock salt) but although unnecessarily violent, he’s core assessment was right: the Biturbo was a poor Maserati. 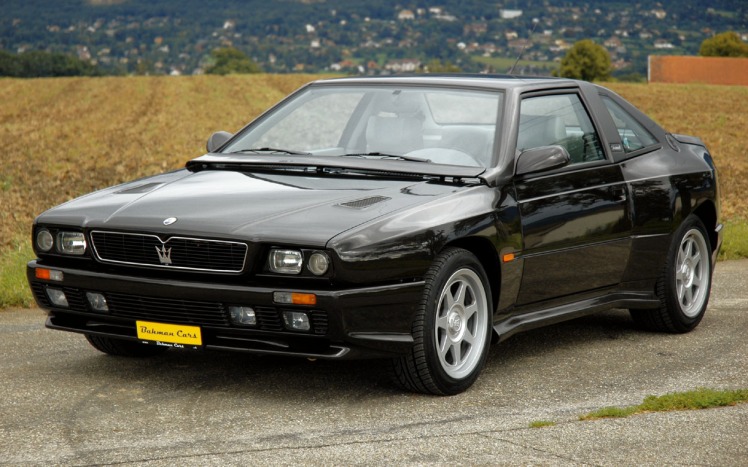 Thankfully in 1990 the Shamal solved several of the Biturbo’s problems, namely performance – by upgrading from a V6 to a V8 – and looks. It certainly wasn’t boring anyone anymore! In fact, many feel Gandini went a tad overboard with the whole thing, hence this not being a universally loved “Trident”. Objectively speaking, it is a bit out there for such a small car but you know what, it all kind of works out really well together. The center pillar is a prominent feature and it’s always finished in black (regardless of body color), which makes for a really cool effect. Plus, it doubles as a rollbar just in case you get a little too confident in a particularly tricky corner. The bonnet has a spoiler, which is one of the most divisive features of the Shamal; it’s function isn’t to help out with down force as you’d expect, but rather improve wiper performance by deflecting air and water from the windshield (according to maserati-alfieri.co.uk). On the back, the wheel arches have a slanted profile, a trait of Gandini’s work that was eventually featured on the Quattroporte IV, another of the more controversial Maseratis.

In the end it all comes down to the eye of the beholder; as I mentioned at the beginning of this little article, the Shamal is one of those cars that hits you hard (hopefully never literally), it’s just a question of how positively or negatively it does so. Slightly mental esthetics aside, this was quite a technically advanced ride for its day, featuring a complex lever system in its suspension, floating brake calipers (to help cope with fade), an electronic adjustable suspension for low speed comfort and high speed satiability and a smart differential with the ability of completely transferring all torque to just one halfshaft if so required. On the power department, the twin turbo, 4 cam, 32 valve aluminum V8 coupled to a manual 6 speed Getrag transmission allowed the 326bhp Shamal to go from 0 to 60 in around 5.3 seconds and on to a top speed of 170; not earth shattering by today’s standards, but certainly not bad either.

If like me you find this to be one of the coolest cars if you’ve ever seen in your life and just simply cannot live without one, expect to part with anything from 40.000€ to 75.000€ (or $45.000 to $85.000). Worth it? By all accounts, the Shamal is a very capable piece of machinery and the interiors look like the most comfortable place in the world to be, so if you love it, give the matter some serious thought because they’re already hard to find and prices seem to be climbing, so be warned.