A couple of months back we were talking about the lovely Urraco and the topic of still affordable 70’s dream rides naturally come up. We mentioned then that there was only one more tempting alternative entry to the glamorous vintage Italian car ownership lifestyle…and this is it, the gorgeous Alfa Romeo Montreal. However, despite its endlessly charming good looks the Montreal has a well established reputation as a deeply problematic, unreliable and temperamental car. But is that bad reputation truly deserved? Is a Montreal any more difficult to live with than any other 70’s Italian? Let’s find out.

The Montreal was introduced in the 1967 Montreal Expo (makes sense). It was a creation of legendary master of stunning automotive design, Marcello Gandini. This was the man responsible for putting Lamborghini on the map as the most outrageous manufacturer of exotics in the world. Visually, the Montreal doesn’t so much flirt with you as grabs you by the collar and drags you along. It cannot be overstated how impressive and magnetic it is. Pictures will never do it justice; you have to see one in person to truly understand how irresistible it is. If you spot a Montreal at a car show, you’re gonna ignore the Porsches, the Ferraris and anything else there to make a beeline straight for it, trust us. Gandini was fresh off the Miura when the Montreal came along and it shows. Like the Lamborghini, the Alfa even has its very own version of the famous Gandini eyelashes. 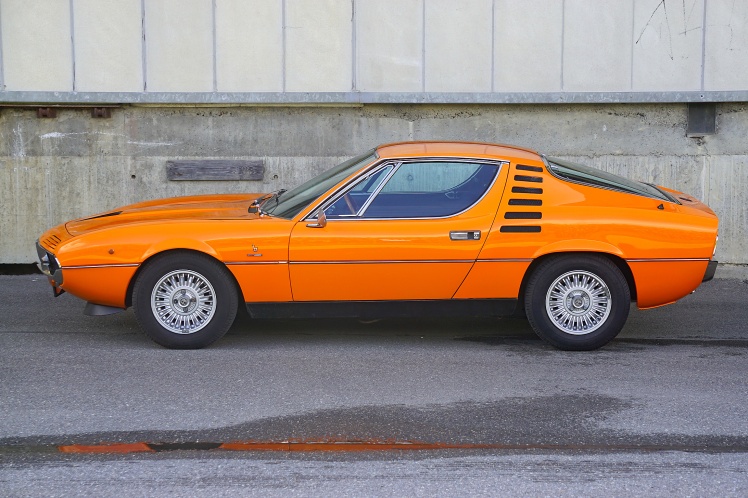 Mechanically the Montreal was put together with a bit of this and a bit of that. Chassis and suspension were borrowed from the GTV while the 2.6L aluminum block V8 is a variant of the one used in Alfa’s greatest achievement: the Tipo 33 (and its Stradale variant). So just pretty standard Alfa stuff with a kickass engine attached…how complicated and/or problematic could the Montreal possibly turn out to be?

Well, it’s certainly more complex than a Giulia, there’s no way around that. The double overhead cam V8 is particular as far as replacement components. For instance, each camshaft is unique and each intake one drives something different. This means that if by some unforeseen circumstance you need to replace one of them, you’ll need to find a specific cam and not just grab any random one from a parts bin. The distributor is a weird mashup that Alfa decided to go with because of reasons and the water pump is a well known failing point. The SPICA (Società Pompe Iniezione Cassani & Affini) injection turned out to be challenging for some as well with failure of the rubber seals being fairly common; a few Montreals ended up getting converted to carburetors because of that. 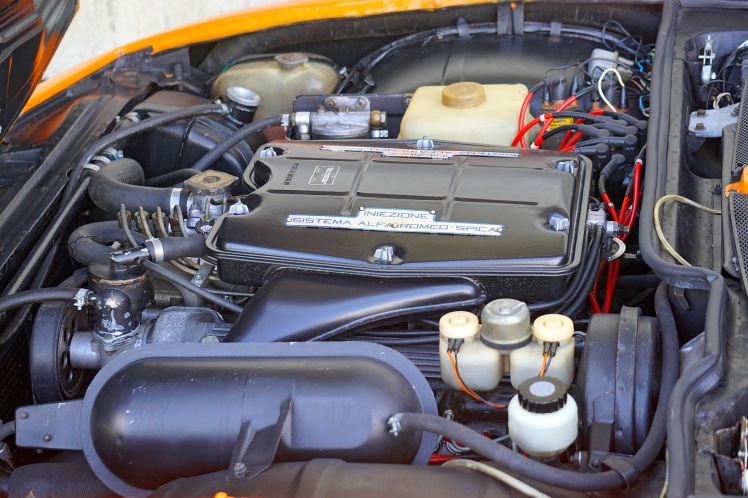 And…that’s pretty much it, the main known issues for a Montreal. Doesn’t sound like the end of the world, right?  More the need for some proper maintenance than anything else. As with any other classic – especially an Italian one – a Montreal is likely only as good as the previous owner, but as long as there’s been some proper degree of care for the car, there just isn’t all that much to go catastrophically wrong. What usually scares folks the most in classics as far as mechanical components are drivetrain issues, but the Montreal’s V8 is extremely under stressed in its application making it very unlike to ever just give up on you. The 5 speed manual ZF is…well, a ZF so not a lot of worries there either.

Plus, as with every car with a cult following, there are step by step guides ready to help you mitigate or downright solve any of the things which are known to fail in the Montreal. Bear in mind that the Alfa community has had almost half a century to look at the problematic spots in the car and come up with a game plan to put an end to them. To this point, Bruce Taylor’s website seems to be of special value to the community of Montreal owners, describing in detail the know issues and how to solve them, specific maintenance procedures, parts compatibility and everything else you would possibly need to know in order to have a mainly headache free Montreal experience.

That waterpump issue? Fit a double bearing and a better quality seal and it’s good to go. The SPICA fuel injection? Proper maintenance, that’s all. Change the filter for the oil supply in a timely manner and the pump itself will hold up just fine. Even the handling can be easily upgraded now. Feel like the Montreal needs better breaks? Alfaholics has you covered with a 4 pot brake kit with vented discs and all the hardware included for under 1500 bucks. Don’t like the ride? The same company will sell you a full handling kit with an upgrade for every single suspension part for about two and a half grand, with other simpler and much cheaper options around as well from places like Classic Alfa and their 500-ish USD kit for instance.

“But what about rust?” you may be saying at this point; can’t talk about 70’s Italians without bringing that up. Well you’d be surprised. The Montreal was – don’t laugh – build to a standard despite the extremely challenging times in which these cars were assembled at first (we’ll get back to that), so rust is nowhere near as much of an issue as you’d expect since rust-proofing from the factory was actually pretty damn decent. The only characteristically problematic spot on a Montreal is usually behind those stylish air vents by the doors. Alfa in their infinite wisdom neglected to provide an escape for the water which gets into those and then pools at the bottom, creating problems for the sills and floors so make sure to check those before being tempted by a Montreal. Not every car is gonna have that issue, but it may occur. 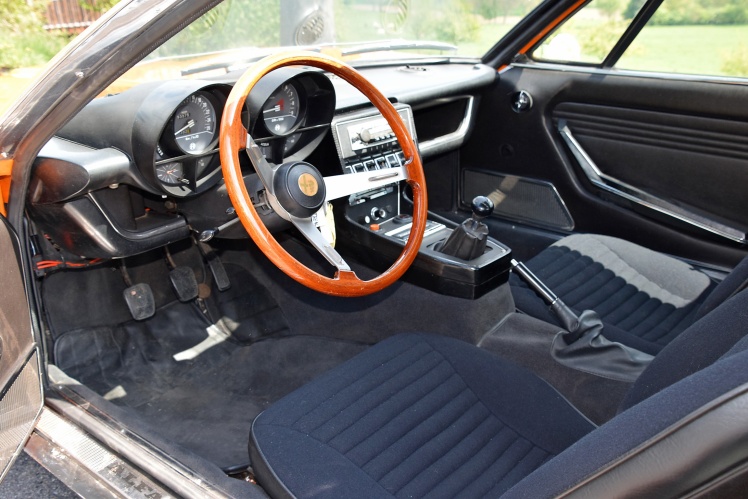 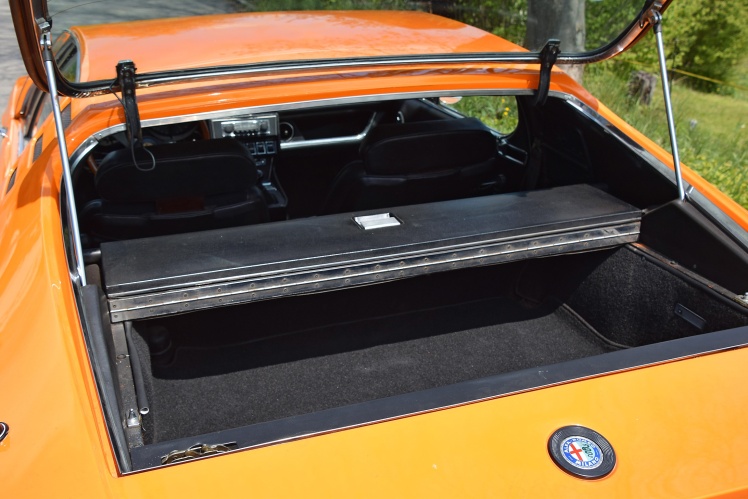 After covering the technical stuff, we need to come back to the initial question: is the Montreal more problematic, more challenging than any other car of the same segment and era? Is its bad reputation actually deserved? We’d have to say no. It’s not as mechanically reliable as any modern mass produced car, no 70’s car is, but it’s not a bigger headache than anything else of its time either. There are a few know issues that are fairly straightforward to fix; with the exception of body panels which are tricky to find, every other part seems to be pretty much readily available to you at decent enough prices; the handling is easily improved if you wish to do so with complete kits that won’t cost a fortune…there’s just nothing about a Montreal that would make us shy away from one. Like any other classic, it’s a matter of going out, finding the very best one your budget allows for, keeping up with the maintenance and upgrade to your liking.

The Montreal’s reputation probably stems from the aftermath of a common problem which plagued many other European cars between the 60’s and 80’s: a lack of specialized maintenance. This was a particularly damning problem in the United States with many different models from a number of manufacturers ending up with an undeserved bad rep. Although the Montreal didn’t directly suffer too much with this aspect since it was never sold new in the U.S. (or Canada for that matter, despite its name, only imported to both countries by private buyers), we have to talk about the usual beating that Italian cars got when commercialized or imported into the U.S. This is one of the main reasons that a lot of European classics are still poorly regarded to this day. Americans were used to fixing everything with a hammer; any local garage’s 19 year old kid could wrench on a Chevy or a Ford. There wasn’t a lot to go wrong and even when it did, the fix was straightforward because the components were equally straightforward. This wasn’t the case for European (especially Italian) cars. Not only did people neglect simple steps like letting them warm up properly or using the correct gas, but when something did break, the local mechanic had no clue what to do with the damn things. So one bad fix would lead to another bad fix a few months later and then another until the cars were pretty much unsalvageable. The lack of proper Italian car specialists in the U.S. throughout the 60’s, 70’s and 80’s meant that very few Alfas, Ferraris, Lamborghinis, Fiats, Maseratis and Lancias – imported or locally sold – ever got decent maintenance done. When they did manage to be looked after by specialists, the bills were much higher than the ones involved with maintaining American stuff which could count on cheap parts and labor, so this only added to the reputation of Italians (and Europeans in general) as finicky, unreliable, expensive things.

But since we’re on the subject, why didn’t the Montreal ever go on sale in North America? A stylish V8 coupe in the American market seems like a no brainer. Well, it should have been but Alfa decided otherwise. Things were getting complicated with an increase in regulations towards safety and emissions; since the Montreal wasn’t fantastic on either of those and with Alfa caught up in the intense labor disputes which defined the early 70’s for the Italian auto industry, the company decided to pass on the North America opportunity, effectively killing the Montreal’s future with just under 4000 units ever seeing the light of day. Even Citroen’s SM – of equal or greater “problematic” reputation – sold 10.000 units more than the Montreal because it was available in both Europe and America.

If you’re looking for a Montreal today (which you definitely should be), how much can you expect to pay for a rare, drop dead gorgeous Alfa Romeo with a V8 engine straight from the company’s greatest icon? Surprisingly not an obscene amount. The Montreal’s bad rep. kept prices down for a long time and the sexy GT is only now starting to get the attention it deserves. Good examples in Europe will start in the mid 70’s and go all the way to 100.000 USD. Not long ago you could have expected to pay 20 grand less, but looks like people have finally stopped sleeping on these.

[The beautiful orange Montreal pictured in this article is currently for sale in Switzerland by the Oldtimer Galerie Toffen. Asking price: 80.457 USD / € 71.454. This is NOT a sponsored post.]

One thought on “The Montreal: Bad or Just a Bad Reputation?”