(Dedicated to AV’s dear friend Keisha K., a big fan of the show and of the Impala) 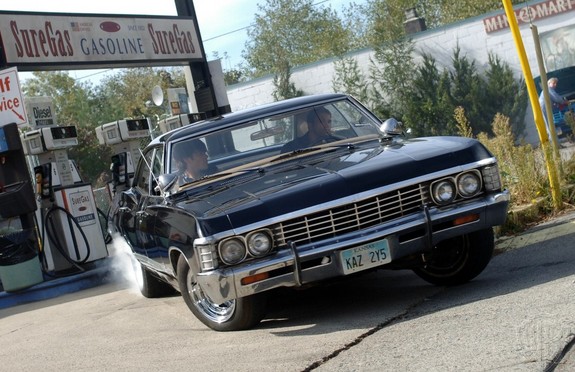 [Updated, May 2016] It was way back on September 13th 2005 that the North American audience was first introduced to Jensen Ackles and Jared Padalecki as Dean and Sam Winchester. Right from the pilot, Supernatural has been extremely popular, building up a unique, vocal and dedicated fandom unlike any other. I mean it, “SPN” fans are some of the most unique, creative, loyal people; it’s astonishing to see the kind of dedication they offer to to show.

Different from many other series which have tried to follow similar formats – and failed – Supernatural has gripped the audience with original story lines, (generally) nice special effects, complex characters and perhaps most importantly, great acting. The basic premise for SPN is pretty simple: brothers Sam and Dean drive all over the US hunting and ending ghosts, demons, ancient pagan gods and pretty much every other nasty supernatural entity you can think of. But it’s not all shotguns loaded with rock salt and messy exorcisms; the show approaches serious issues that anyone can relate with, especially when it comes to family.

From the start, the audience has been witness to the two brothers clashing, working out their differences and then clashing again soon after, even throwing some punches on occasion. The Winchester boys pretty much raised themselves, being generally looked after by the father, John, an expert hunter who lost his wife when a particularly nasty demon engulfed her in flames. Dean, the good rebel, strong minded, loyal to family and dedicated to his cause, has carried the responsibility of watching over his brother “Sammy”, who managed to escape the family business for a while, but was forced back after the death of his girlfriend and that has since dealt with serious doubts and issues. 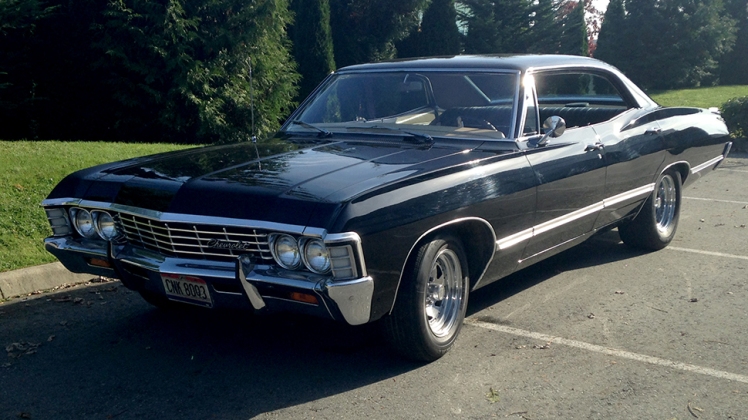 But I’m not here today to explain the plot of Supernatural in detail; not only is this not the time or place, but with well under a decade and still going strong, SPN would take a good long while to explain to a non (or novice) fan…and it would come across as pretty damn weird too…it’s one of those things you just gotta see it for yourself.

Today, AV pays homage to third, 4 wheeled Winchester, the lovingly nicknamed “Metallicar” (something thought of  by the fans due to Dean’s love of Metallica), but more commonly simply referred to as “baby”: the 1967 Chevrolet Impala. After Ackles and Padalecki, the Impala is the star of the show and like any star, it created quite a buzz around itself, over time turning into a full on phenomenon. It’s impossible to imagine Supernatural without the Impala, it really is as much a character of the show as the two brothers. A gift from John to Dean, the Impala has been around from the very beginning and it will probably never leave; fans would riot and burn down the CW. On the season one finale, it even got crushed by an eighteen wheeler and still, Dean rebuilds it putting it back on the screen in no time. From then on, the Impala has suffered again and again, but if keeps getting redone – well, cloned anyway – and finding its way back on the road in no time.

Having the Impala on Supernatural is a won bet from the show’s developers. It fits right in and no one ever wanted anything else in its place; it was received by the fans with open arms from day one and I honestly think it is by far the most beloved car on television right now. And it’s not difficult to understand why. First of all, baby has an amazing presence; its hard to imagine that not long ago these Impalas were borderline deprived of any real worth. 67 was definitely the best design year for the Impala, it just puts out the elusive bad boy vibe in a major way. It’s black, it’s menacing, it has extremely aggressive lines (the front grill resembles teeth ready to take a chunk right out of anything which happens to be in the way) and it just owns its part in the show. In a series filled with amazing music, the deep rumble of the Impala’s big V8 became SPN’s best soundtrack.

Now I’m pretty sure I’m not the only one who thought back when Supernatural started, about why wasn’t another version of the devilishly (sorry about that…) handsome Impala used for the show? Why not a sporty Coupe, an SS? The great 427 for instance? Well because quite simply it wouldn’t work well as a family car. Remember, the Impala was meant to be a suburban family hauler, nothing more. It had to be a practical sedan and not some tire shredding dragster.

On the outside the Impalas used on the show are essentially stock; some things do change occasionally like the badges. For instance, sometimes there’s “Chevrolet” lettering on the front grill, sometimes it’s missing…but that’s  normal on the TV land, not every detail is always there. Other than that, the Impala badges on the rear quarter panels were removed, the running lights are usually blacked out on this trim level but on the Metallicar they’re opaque like the ones on the SS; the front and rear bumpers are usually featured on the 427; although I’ve seen them on sedans, they’re much more common on the top of the range model of the 67 lineup and, for the first seasons, there were also police cruiser-like spotlights, but have since been removed. A shame, because they looked amazingly good. Regarding rims, the Impala is equipped with, believe it or not, one of the cheapest sets you can find. The brand isn’t even clear on any of the sources because so many companies produce extremely similar models. However, the closest thing around are the Cragar Super Spoke so I believe the SPN Impalas run on those.

So where was this TV star born? What’s the background on the car that has its own fan and Facebook page? A car which revolutionized the market for all of its non-Hollywood brothers and that has ignited an ever increasing clone market? Well, Nicholas Knight, author of “Supernatural, The Official Companion Season 2” quotes Jensen Ackles speaking about baby at the 2007 San Diego Comic Con; apparently there were already  5 or 6 Impalas on the show then. The main Impala at the time was “Hunter”, packing a 427, skid plates and stabilizing bars…what more can one ask for? “Civilian” and “Hero” were also working for SPN back then with the stunt car featuring the so called stomp brakes installed in order for the stunt drivers to be able to control the front and rear brakes separately.

The original, 2005 Metallicar was bought from the Kelley family of Farmingdale (New Jersey) in 2005. Baby was, funny enough, originally painted in – wait for it – baby blue. Yeah, something had to be done about that. The Kelleys bought the car from the original owners who got it new back in 67. The first SPN Impala retired in spectacular fashion after getting t-boned by an 18 wheeler at the end of season one. Recently, Ackles found it on the lot, stripped, rusty, but still recognizable. You can see the pictures here. “I guess you’re never really dead on this show”, he wrote.

These days, SPN features 8 different Impalas but the hero car, the close up queen, the current baby – we’ll see how long she lasts – is this cutie: 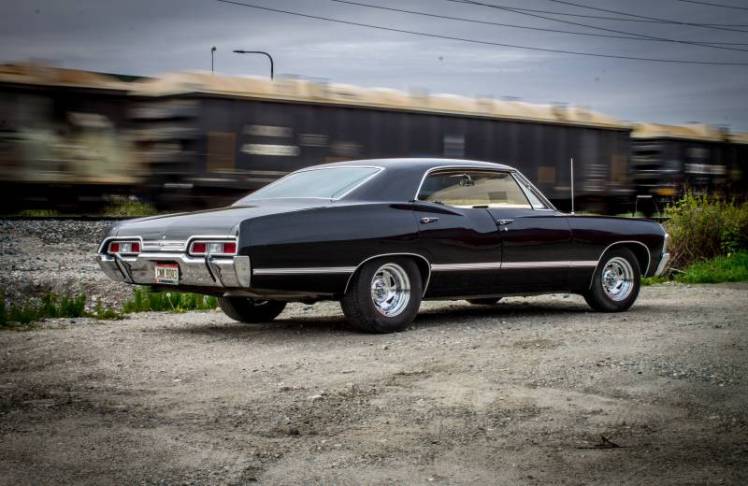 Supernatural is a pretty imaginative show and the creators have consistently found interesting and hilarious ways to include the Impala in the story, they’ve even developed a full episode just from the Impala’s perspective. However, my personal favorite installment of SPN is “The French Mistake”, an episode in which the Winchester brothers find themselves living in their own TV show. Dean faces the fact that his beloved baby is just a prop and many of the Impalas used in the show make an appearance in this hilarious clip that I can’t help but share:

At another time, the Impala rocked a Knight Rider revival, complete with the show’s theme song and the characteristic red scanning light. Sam was at the time disembodied and stuck in the Impala (boy this show really makes no sense when you write about it):

Beyond the silliness and hilarity, it’s nice to know a bit more about what’s actually behind the fantasy, where the Impalas come from…but in this case, even that takes a back seat the the concept of the “Metallicar” itself. The Winchester’s Impala brings something to the story, it’s not just a good looking prop. This is something we haven’t seen in a show for a long time now, maybe since Knight Rider…Baby moves with the emotions of car fans and it creates new ones. It has taken a life of its own and we’re loving it. Baby became what every good car star should be: an icon for the ages.

Looking for one yourself? I wish you the best of luck…Baby has gone global and everybody wants one. The show has turned a totally overlooked model  into a highly desirable commodity, so a nice 4 door 67 is getting increasingly difficult to find. If you happen to come across a nice one, it goes without saying…get it immediately, everyone needs one of these beauties in their life.

In the meanwhile, if the gorgeous Impala is out of your budget for now, you can always entertain yourself with a scale model…a little Baby while a bigger one doesn’t come round. 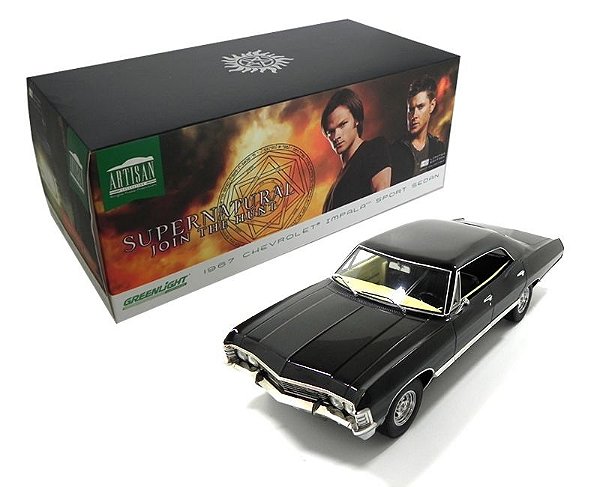