The 1970’s were a time of great contrasts within the auto industry. On one side there was the dreaded oil crisis – borderline lethal for American muscle – a huge blow for many automakers and on the other, great risks were taken; concept cars were created with looks that seemed to come straight from sci fi and creations like Aston Martin’s Lagonda were tremendously ballsy crap shoots. Above everything else, I think the 70’s were a time when imagination was put to work, for better or worse, and there’s true value on that.

It was during this crazy era that some of the most curious pieces of style and design  ever created saw the light of day, and it sure seems like the sports cars manufacturers had a particularly effective mix of creative juices flowing back then (I will NOT make a drugs joke here, too easy), creating new looks full straight lines, aggressive front ends, dramatic rears, spectacular attention detail and an overall craziness…that was the most important bit of the whole thing.

One of the companies that truly embraced the 70’s spirit was our (well mine at least) beloved Lamborghini. This was the time when the bull loving Italians came out with that whale of an automotive landmark called the Countach. But the inevitable Countach isn’t what I wanna talk about today. Because it’s truly a colossus, that historic car casts a huge dark shadow over some of its very interesting siblings, and now I feel like casting a bit of a light on that shadow. 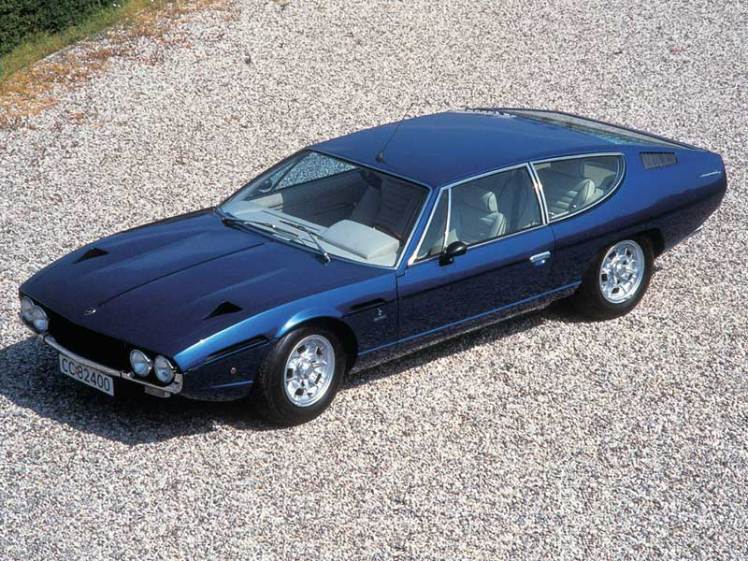 Back in ’68, Lamborghini came out with something properly unique, the Espada. This sui generis looking ride stayed in production until 1978 , going through  3 different  stages that gave it the designations S1, S2 and S3. Personally the S1 is my favorite because being the genesis of the Espada, not only was it the purest version in terms of design, but also  the proving ground for the technology and the great target for critics. And there were some harsh ones of those. As Jay Leno put it, with the Espada there’s no middle ground, you either love it or hate it.

Based on the – extremely – futuristic show car Marzal (1967), the Espada is the result of a long process in which the Marzal’s insane features were watered down in order to make the concept more practical, give it better social skills. Nevertheless the design remained controversial and to this day, critics shout to whoever will listen about how ugly this Lambo is. I’ll wholeheartedly disagree..

Brainchild of Marcello Gandini (father of the superstar Countach and of the striking Diablo), the Espada is actually amazingly practical; it has 4 real seats, not just a +2 kind of thing, it doesn’t crush it’s passengers to death in the back seats, it’s very comfortable, it has a big trunk and because of its huge rear window, it’s easy to see were the heck you’re going while in reverse. Practicality in a Lamborghini, ain’t that something? It’s exactly at the back of the Espada that you can find one of the most recognizable pieces of automotive design, rarely accredited to Lamborghini: that bit of glass below the boot lit and above the taillights; usually it’s Honda with its CRX that gets the cudos for that one, but the Espada did it first.

So it’s a fact that the look of the Espada isn’t everyone’s cup of tea, but even if you’re underwhelmed at first I think that given enough time, it will grow on you like so eloquently stated Daryl Adams from the International Lamborghini Registry website. Personally I thought it was a strange looking thing at first too, but now I believe it’s one of the most accomplished designs in Lamborghini’s classics catalog. The front design alone is a masterpiece. Even without being anywhere near consensual as far as the impression it causes, the Espada looks at least saved it from being relegated to a foot note in the company’s history as is the case with the Urraco for instance…

The first part of preparing the Espada mechanically was a  simple copy/paste process; the engine and transmission were pretty much  directly transplanted. Performance wise, the 325 hp V12 allowed the Espada to run all the way up to 155 mph and according to records, it was almost economical with a mpg very close to what some executive saloons manage to pull off today. Not bad for a ’68 Italian V12 huh? Even more impressive when we remember that it had a huge body to haul around, almost 16.5 feet long by 6.5 feet wide. 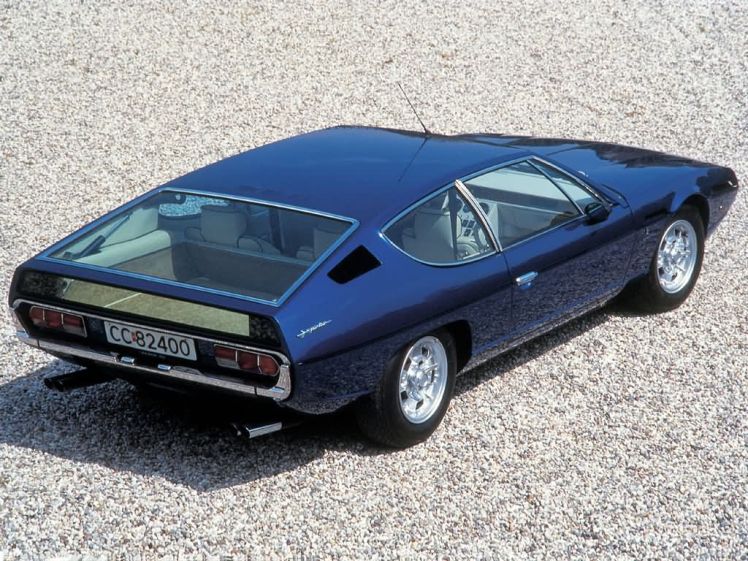 Built between March of ’68 and November of ’69, the S1 version had a limited production of just 186 units. The S2 GTE (December of ’69 to November of ’72) saw the Espada’s numbers increased to 575 (with a few changes such as a new dashboard layout and new rims). Finally, the S3 (456 made from December of ’72 to December of ’78) saw implemented a few more style changes like a sunroof and the (tragic!) loss of its gorgeous chrome bumpers in favor of ugly rubbery things demanded in the US market.

Nowadays the Espada is fairly accessible (when you take into account its pedigree that is); I’ve seen these sell for anything from 20 to 40, even 70.000+, so it really depends on the condition and history of each individual car, but the S1 are usually the far more expensive ones.

The Espadas have a bad rep. because of  alleged mechanical issues, but that’s really justified; referring again to Jay Leno’s experience as an Espada owner, the Lambo is pretty much like any other classic Italian sports car: it needs to warm up before you start flooring it because the oil has to be hot enough..otherwise it’s a hell of a recipe for disaster. But if you keep it properly maintained and don’t aim to win drag races 5 seconds after you turn the key, the Espada will never bother its owner more than any other car would.

The Espada is the base for another really cool Lamborghini, my personal favorite actually: the very discrete and extremely unique Jarama. This one fell far from the tree in  terms of looks; it really doesn’t resemble one bit anything else from the Italian manufacturer. The Jarama thrives on an tribute  you just don’t think about when the name Lamborghini is involved: simplicity. In fact, when comparing the Jarama and the Countach it’s hard to understand how they came from the same planet, let alone the same manufacturer. Developed over a shortened Espada wheelbase, the Jarama was baptized in honor of the Spanish district with the same name, internationally recognized for the breading of bulls (of course).

The sensible Lambo was presented to the public at the 1970 Geneva Motor Show. Dreamed up by legendary Bertone, the Jarama (Yah-RAH-mah ) it’s probably the most unexpected thing Lamborghini ever came up with. At first sight, the straight lines appear plain and not at all like the over the top certifiable madness we’ve come to expect from the Italian manufacturer but the amazing thing is that the Jarama becomes surprisingly complex; every single time I look at it I notice something new, a little detail, a pleasant angle, crafted symmetry…I seriously encourage you to spend some time taking a real good look at it, it’s worth it.

Successor to the striking Islero, the Jarama was available in two versions: the 400 GT and the 400 GTS, both equipped with the – then already – traditional Lambo V12 and weighing a bit more than the Espada, even being smaller. But being heavy didn’t make the Jarama slow. The funky Lambo was a fast, comfortable and fun to drive. The ability to carry luggage played an important role in the Jarama as well, so the rear seats could be folded to increase the boot capacity…again, practicality in a 1970’s Italian supercar, who’d have thought. 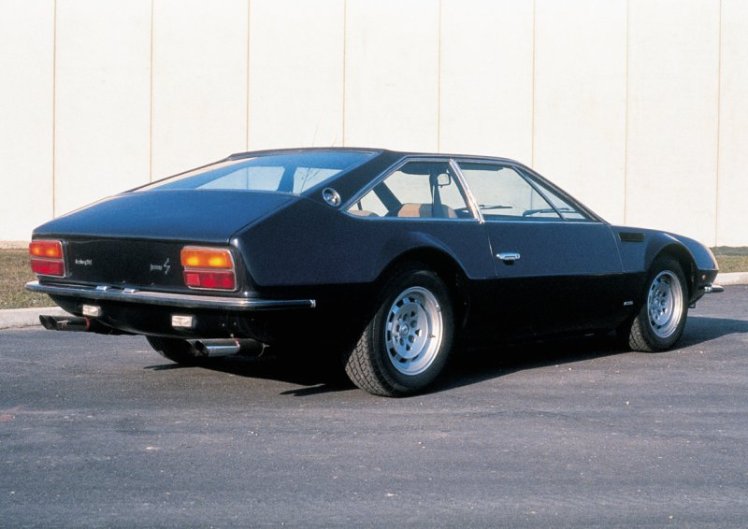 Between 1970 and 1973, 177 Jarama GT’s were built. The GTS was produced from ’73 to ’76 after being presented at the Geneva Motor Show in ’72; 150 were made, easily distinguishable from the GTs thanks to the air intake in the hood. A new windshield wiper system was also developed and new rims were designed. In the interior, some of the wood trimmings were replaced by aluminum, the heat and noise insulation was improved and the size of the front seats was reduced in order to create more space for the passengers in the rear, surprising thoughtfulness from the company that had sacrificed every bit of commodity imaginable for style’s sake with the Countach. But this being Lamborghini, performance wasn’t forgotten and the GTS’ diet of 176 lbs, plus an increase of 15 bhp allowed it to be 10 mph faster than the previous version.

Although being interesting and unique and everything else nice I said about it before, there’s kind of a sad chapter to the story; its potential was never fully developed. Well thinking about it very few cars do have their full potential become a reality, but this one was allowed a glimpse of the life it never had and that’s more than most ever get. A special version of the Jarama was created by New Zealander Bob Wallace, senior Lamborghini test pilot during the 60’s and 70’s; called the RS, this striped down raw Jarama was never accepted by Ferrucio Lamborghini and because of this, the project never got into production, something very unfortunate to Lamborghini’s history no doubt.

You can take a Jarama home for something like 60 or 70.000 U.S. dollars, not cheap  but at least you’ll have something truly special in your driveway.

The Espada and the Jarama are interesting by their unique nature and you have to give them props for managing to maintain their own style and identity  when the Countach was pretty much blocking up the sun for everything else. They’re unlikely Lamborghinis, both stirred controversy among public and critics and both have, above anything else, the merit of originality (not forgetting – amazingly – functionality). Their value is only gonna go up, even the ones in rough condition so if you can afford either, it may be a good idea get them right now.