Station wagons…until now they’ve had a – let’s say – not so glamorous reputation in the States; in fact I can hear some of my Americans friends yawning right now! Seen by a lot of people as nothing but family buses, attributes like sportiness are not something people in the US are particularly accustomed to associate them with. In Europe things tend to be a bit different because everyone is used to plenty of RS Avants and such. Thankfully now in America there are gems like the CTS-V Sport Wagon changing the way this kind of configuration is perceived. I mean, stylish fast cars with actual space to carry people and a bunch of random stuff around? What’s not to like? I’ve always had a thing for big cars and as such, I’m obviously all for cool, fast, (and especially) unusual wagons, but what really bugs me is when something gets mislabeled by people who should know better…so let me digress a bit.

Lately there’s been a ton of talk about the CLS station wagon. Why? Well, because while I and other folks call it just that, a wagon, Mercedes and pretty much all of the automotive press calls it a “shooting break”. Although this is a smart marketing move, a shooting break per se it does not make. In all fairness yes, this is kind of a grey area; it’s tricky to claim with absolutely certainty what is and isn’t worthy of this name because, well, no one actually takes this kind of car to shoot anything anymore (shooting breaks were so called because they could move people, dogs and shooting gear back in the day of fancy hunting parties) but yet, usually there’s a consensus (which I personally like to follow) and that lately has just been kind of thrown out the window. You see, since about the very early sixties the rule has been fairly simple: when you start with a coupe and make it all “wagony” you end up with a shooting break. When you start with a sedan, you end up with a station wagon (or an estate as the Brits call it). Pretty simple and straight forward. The CLS is not a coupe hence this version of it is a station wagon. Don’t get me wrong I’ve got nothing against the CLS or this particular version of it, I think they’re actually really great looking, but for the same reason I don’t like to call a dog a cow, I can’t  call this a shooting break. Now you’ll tell me: “but the Lagonda! There were shooting break versions of it! How about that?” Well, you’re right, there were, but they’re not accurately christened either. In fact there are all sorts of deviations from the shooting break term that shouldn’t be. Over the years I’ve heard many misappropriations (in my humble view anyway, many of you can and will certainly disagree) of the shooting break name, both by manufacturers and automotive journalists; the previously mentioned Lagonda: not a shooting break; the Ferrari FF: not a shooting break (it was made like that from scratch); the C30 Volvo: not a shooting break, there’s a word for cars like that: it’s hatchback; the Dodge Magnum: not a shooting break (I mean come on people…I actually read this in more than one place…why not a squirrel for instance? Can that be one too? It has a long tail…). Ok, not everyone does this and many websites – due to an endless number of reasons – run whole or edited versions of press releases, I get that, I get having limitations I really do, but when actual (I hope) automotive journalists, people who make a career of writing about this kind of stuff and who are supposed to have a critic spirit/perspective, wholeheartedly go along with marketing…it’s not good…

Well, that was my little outburst of emotion so onto why I’m really here today: cool, unique, custom station wagons/estates. I thought it would be a good idea to take a look over a few little known, very limited numbers versions of this kind of cars (that just also happen to be endlessly cool). So without further delay:

I’m a sucker for the 450 SEL. It is without a doubt one of my favorite cars of all time and I’ve recently came this close to finally owning one but…I’ll have to wait a bit more. One hell of an Autobahn runner, the 450 was always stunning to look at as a sedan and when Crayford came up with this estate body, they certainly didn’t disappoint. 80 W116 Crayford estates were made and sold via the Mercedes official dealer network in Britain and in the US; however only 15 (some sources claim even less, 8 or 9) of those were 450 SELs, making them a seriously rare beauty. Back in January one came up for sale with a price tag of over $50.000, so add expensive to the description as well.

Completely different from the XJ40 official prototype, this version was designed by Chris Humberstone, a conversion specialist who also worked as a consultant to F1 teams like Benetton and McLaren. 2 XJ6 estates by Humberstone were made especially for Mr. (and Mrs.) Williams, chairman of the Jaguar dealer group “Hatfields” (Shefield, England) these were meant to replace the red XJ12 Series 3 estate, also designed by Humberstone. Reportedly, a 3rd estate was also built for an American client. The thing that makes the Humberstone XJ6 so special is the unique design. It’s not just an XJ6 with an extended rear; it has its own style and character. Some people hate it exactly because of that. The slight arch above the rear wheels makes the back of the car seem heavy, on the verge of breaking even. Personaly, I find it to be an amazing detail. The last time one of the Hatfield cars came up for sale it carried a surprisingly modest $20.000 tag with it.

The XJ6 Humberstone images I used here belong to the good people of supercars.net who were extremely kind to let me use them, so a big thank you to Mr. Richard Owen and to supercars.net 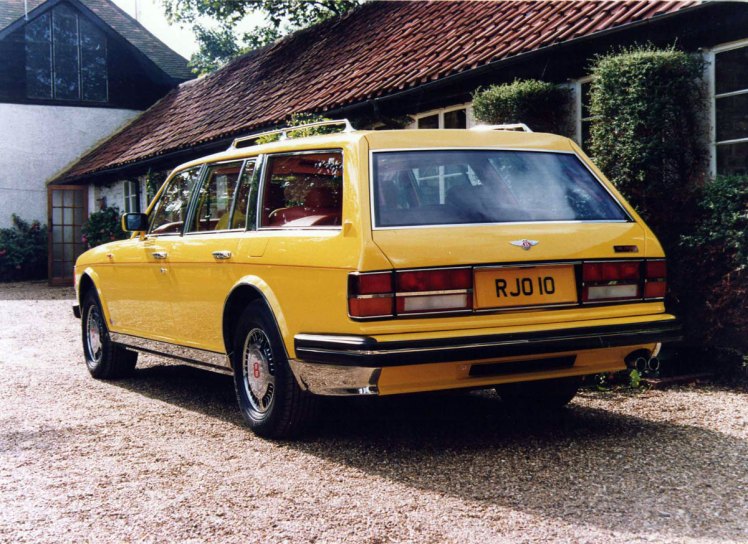 Your Bentley not fancy enough? Wagonize it! This is pretty much the gist of the idea behind Robert Jankel’s Val d’Isere series: making something special, custom, exclusive…however not necessarily in good taste. Between 1990 and 1992, nine (only nine…they were that expensive!) of these were made and every bit of them was tailored to their new owner’s needs and desires. So, if you wished, you could have your Turbo R Bentley estate in this bitchin’ yellow for instance with interiors to match (you can check out the early 90’s McDonald’s like upholstery scheme here). One of the really special things about the Val d’Isere estates was the optional 4 wheel drive system. The Turbo R is originally rear wheel drive but Jankel came up with the all wheel drive option in order to make the Val d’Isere fit to take on a challenge or two. Both front wheels had their own hydraulic motors; these would shut down when the car’s speed climbed above 30 mph; pretty ingenious huh? 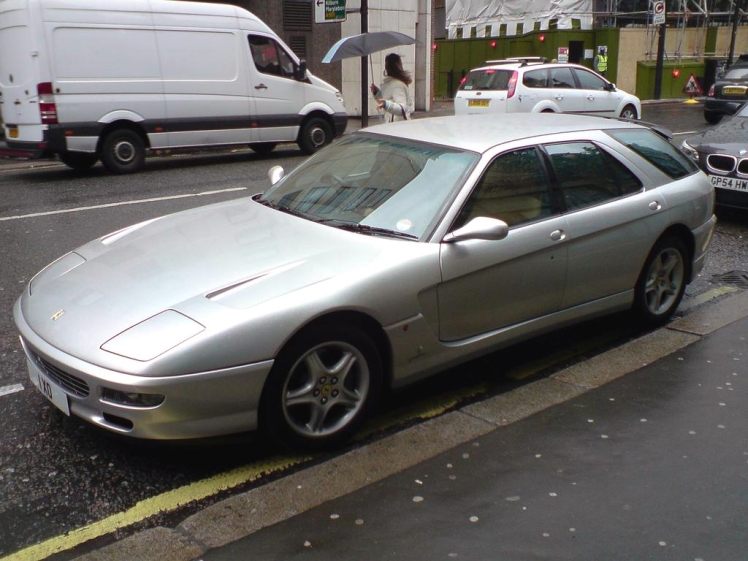 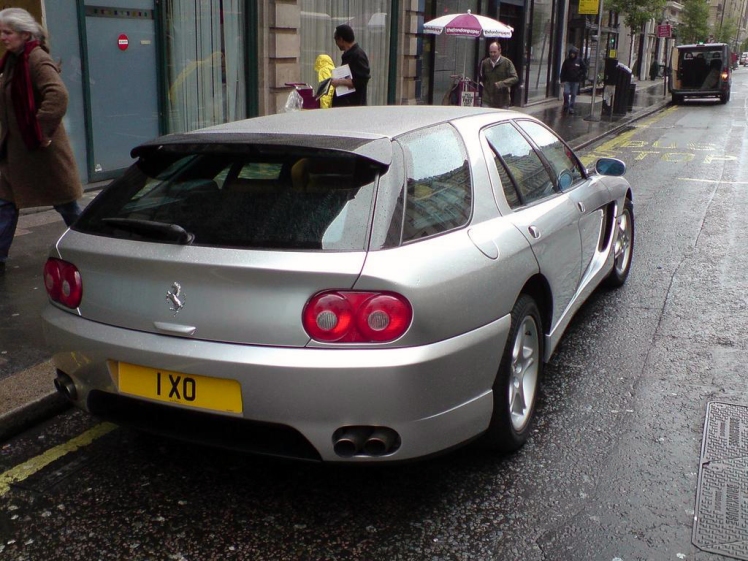 Ferrari, station wagons…at first, these two things don’t seem to match all that well, but in the case of the “Venice”, oh boy…it ended up being one amazing concoction! The 456 was always an alright Ferrari, but it didn’t really have that flare, that awe quality a Ferrari should have. However, when Pininfarina made this special estate version of it, they it hit the nail right in the head. Everything flows beautifully and the rear is a masterpiece, there’s no other word for it! One of the best looking ever made, I’d say. If there’s a more stylish way to go shopping and pick up the kids from (the absurdly expensive, private) school, I certainly don’t know about it. So where did this thing come from anyway? Well, unsurprisingly the order came from Brunei; the current Sultan’s big brother, His Royal Highness Pengiran Digadong Sahibul Mal Pengiran Muda Jefri Bolkiah ibni Al-Marhum Sultan Haji Omar Ali Saifuddien Sa’adul Khairi Waddien (yeah, all that…) ordered 7 Venice estates from Pininfarina but in the end, for reasons unknown, only ended up taking 6 home with him; each set him back a reported $1.5 mil. The 7th car was sold in London by famed Taylor & Crawley back in 2001. 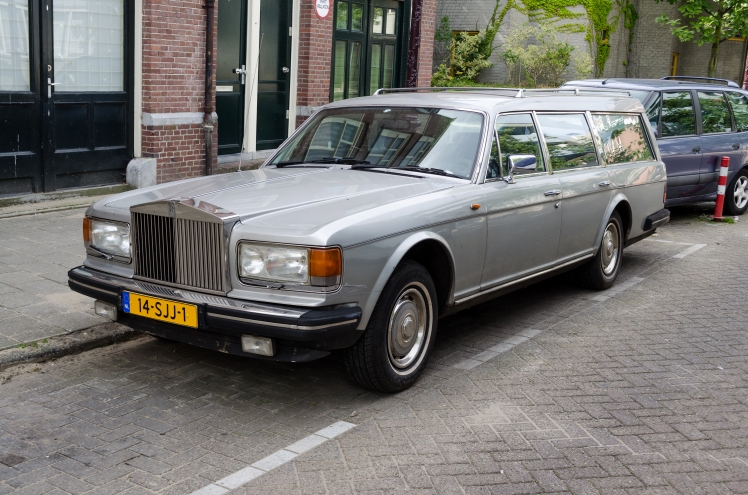 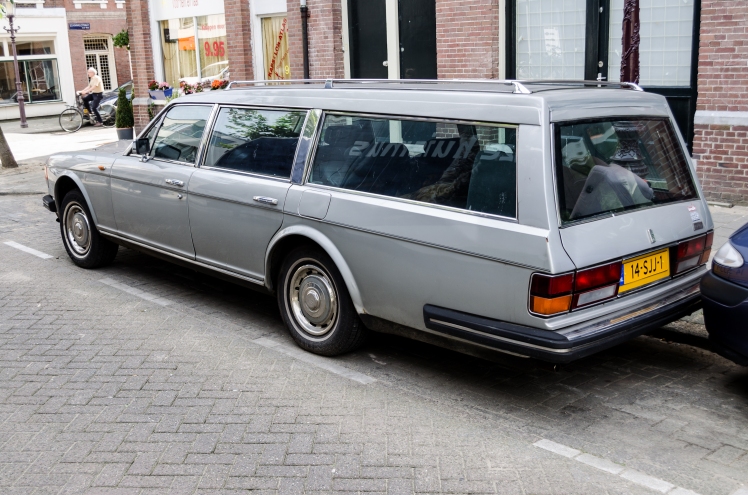 Okay, OKAY, I know…but bear with me on this one! Fine, it’s a custom estate that happens to have carried dead people around. I get your reluctance, it’s not exactly a hot selling point but it shouldn’t put you off from looking at the big picture either. Why I love it and why you should love it too: the Silver Spirit is a very nice looking Rolls, simple but with tremendous presence and in this particular form, being this huge, that presence only gets more assertive, more refined; there’s no way you’re not gonna get noticed driving around in one of these (for good reasons, not the whole there use to be coffins in the back thing). Plus, all that space! Having something that comfortable with a huge boot to remodel any way you’d like? Tell me that’s not one hell of a chance to go wild and creative! These Silver Spirit conversions were originally made for A.W.Lymn Ltd.; they actually still have one in service today; others were sold and pop up at random places. A while back, a black one came up for sale for a little over $20.000 and I honestly considered selling my house and just move in to the back of that thing.

The Silver Spirit pictures used in this article belong to Mister Arjan De Rooy who was extremely kind to allow me to use them here, a big thank you to him. His Flickr gallery is packed full with interesting and beautiful pictures from all kinds of classic and modern cars so it’s definitely worth a long visit! It was with Mr. Arjan De Rooy’s help that I was able to find out that this particular Silver Spirit Estate spotted in Amsterdam was made in 1984 and registered in the Netherlands back in 2011. It shows signs of needing serious TLC so here’s to hoping her owner doesn’t let it get too far!

One thought on “Hop on the Bandwagon”