When the Mercedes Benz 600 W100  was presented at the Frankfurt International Motor Show in 1963, it was immediately – and very rightfully – acclaimed as the crown jewel of the automotive world. The W100 (“Grosser”) was Mercedes’ answer to the question: “how amazing can a car be if conceptualized with no regards whatsoever for cost?”

The 600, especially in its Pullman incarnation became THE fashionable way for terrible leaders and dictators to move around. I find it especially hilarious  (and at the same time, sad) that the W100 was the ride of choice for socialist leaders whom, in the best spirit of their ideologies , would ride around in the most expensive car in the world. What more effective way of spreading the joy of communism than driving by a miserable population in a rolling bed of luxury?

Idealized by designers Paul Bracq and Bruno Sacco (with a Mercedes Benz carte blanche) and developed by engineers Rudolf Uhlenhaut and Fritz Nallinger along with Karl Wilfred, responsible for car body development at Mercedes between 1959 and 1976, the W100 was crafted over a period of 7 years with the intent of being something truly unique and elevated, the peak of technology and luxury. Well, mission certainly accomplished. The W100 was and still is one of the most appreciated and most beautiful Mercedes ever to see the light of day. Everything about it is high quality, every single piece of trim is unique to one car and one car alone, hand finished (often hand made) to fit perfectly.

This model was so special that a whole new engine was created for it; a normal 6 cylinder could never keep up with its needs, so Mercedes developed a  6.3L V8 with 250 bhp code named M 100. But it wasn’t just the engine that was new on the big Merc; the stunning car welcomed new wonders in the field of hydraulics. The suspension, the truck lid, the divider, the windows, the door locks, the adjustable seats, the sunroof, the brakes and even the doors are operated by the hydraulic system, making all these parts pretty much completely silent in operation and much faster than if they were equipped with traditional electric motors. However, there was a price to pay for all this innovation and fanciness. The W100’s hydraulic system is extremely sensitive and it takes very little to completely ruin it, just closing the trunk by hand for instance can totally destroy the W100’s hydraulic system…and you really don’t wanna do that because it is ridiculously expensive to sort. Also, not only can this system bankrupt you but maim you as well. The tremendous pressure in which the mineral fluid is kept means that, if your not careful, you can always chop of fingers or a whole hand while closing your window. Not only that, but if a line breaks, the stream can act like a water jet cutter.Yikes.

This failure sensitive hydraulics are am annoyance now, but picture the issue when the W100 was new! How angry where those dictators when the big Merc would break down on them? Let’s say you’re the leader of a small but oil and diamonds rich country somewhere in the third world. You wake up in the morning only to find your W100 slammed on the floor. Oh my, now that would put a cramp on your day. Sure, you could still go around executing dissidents, crushing coups and just generally spread terror but it just wouldn’t be the same. Mercedes however had the good sense of having a mechanic available to leave at a moment’s notice to any part of the globe as soon as a malfunctioning W100 was reported. We’ll never know how many lives this system saved by breaking down and ruining some bonkers dictator’s day.

But I don’t want you to think that the W100 is only connected to terrible people…yes, some of the big Merc’s owners turned into a laud expression of hypocrisy on wheels, people like Fidel Castro, Mao Tse-tung, Leonid Brezhnev, Pol Pot, Kim Il Sung and Saddam Hussein (among many, many others), but there were also a lot of other personalities that gave a much more positive vibe to the W100’s reputation; people like The King (Elvis), John Lennon, Hugh Hefner, Coco Channel, Aristotle Onassis, Jack Nicholson, Rowan Atkinson, the great Jay Leno – with its one of a kind supercharged 600, pictured below -and even  Jeremy Clarkson fell for the charm of the W100. Besides the famous folks already mentioned (and to prove just how diverse the owners of this model were and are) I still have to mention people like Hirohito, Josip Tito, Jomo Kenyatta, Ferdinand Marcos, Deng Xiaoping, Nicolae Ceausescu, Prince Rainier and Pope Paul VI, all W100 owners, not to mention the countless governments that also felt the need tho have this amazing ride on their governmental fleet.

It’s not just on the client list of the W100 that we find diversity. There were also a few variations of the car itself . Staring with my own personal favorite, the SWB 600, the basic one. Now, when I say “basic”, keep in mind I’m still talking about something that’s a behemoth of a thing: 2.6 tons spread along a car almost 18 feet long and 6.5 feet wide. But of course, I am a simple man and my tastes are modest…for the more flamboyant super rich, there was the need for something a little bit more…ostentatious. Along came the Pullman, the W100’s limousine version. With an impressive 2.7 tons, the Pullman was over 20 feet long and could be had with either 4 or 6 doors. There was also a convertible version available, the Landaulet, either a short soft top (open space  just above the last of the rear seats) or a long soft top (open space was complete with the exception of a bit of hardtop above the front seats). 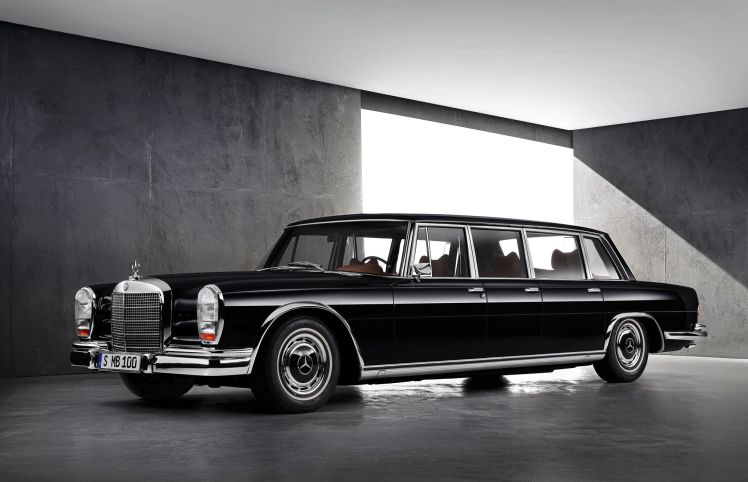 There were also a few exclusive versions of the convertible option like the Pullman Presidential Landaulet (only 10 were made, distinguishable from the long soft tops by details like handles for passengers standing up), the Pope’s Pullman Landaulet (with rear doors longer than usual and a single back seat reserved for the religious leader), and a four door Landaulet built for the race driver Constantin Von Berkheim. Among other interesting variations of the W100 (not Landaulet), there was a hearse built by German company Pollman and a coupe, the “Nallinger” created in 1965 by professor Fritz Nallinger, one of the fathers of the W100 for his own personal use.

The W100 is without a doubt an historic landmark and an object of great desirability, something that’s widely reflected on the high prices these things still fetch. The price tag’s length varies according to the history and spec of each individual W100 of course, but one thing is universally true for them all: they’re not cheap. The ones that are, you can consider ruined and you should stay away from them at all costs. This is by far the most expensive classic car to restore. Nothing comes close to it in terms of the sheer buckets of cash needed to have it running properly.

There isn’t a single thing on 4 wheels you can compare to the biggest and baddest Merc ever made; even the very production period is a reflection of the W100’s exclusivity and excellence. During 18 years these cars was made with virtually no changes coming to a total of just 2667 units  built between 1963 and 1981: 2190 short wheel base, 428 Pullman and 59 Pullman Landaulet.

Mysterious, dangerous, certainly imposing (it’s still the car with the loudest horn in the world), but above all timeless, the W100 will always be the measure to which all other luxury cars will be compared.

3 thoughts on “For the dictator on the go: The Mercedes-Benz W100”