Lately I’ve been looking for a new car, but of course, when I say “new” I really mean used and when I say “looking for” I put the emphases on the “looking” part because from wanting to having there’s a a tiny little difference…real small. Well, huge actually. But anyway, I feel confident in my search and it’s heavily armed with loads of this confidence that I like to browse through websites like ebaymotors and even craigslist sometimes. a short while back when I was still writing for my previous blog, I remember spending weeks salivating over a gorgeous 1986 Audi Quattro; then I was desperately in love with a Lancia Delta HF Integrale Evoluzione filled with little WRC badges and everything…mmm…

But I ended up not writing a word about the subject until now when a funn thing happened. I was “looking for” a Mercedes when I came across a 2008 SLK for sale (in Portugal) and the person was asking (and it was a completely normal price, I saw plenty of others along the same line in terms of price) 46.000€ for it, that’s something like 64 thousand Uncle Sam dollars. For an SLK! What? Was it a joke? Had to be…

Sadly though, it wasn’t and that got me thinking, what actual decent cars could I buy for a lot less money? At the time I found great candidates for half the price of an SLK. Now I’ve picked up the topic again and found out that these Mercedes are considerably cheaper in the US, about 30 to 40 thousand each. Still a whole lot of money and you’re getting very little bang for your buck, so here I am presenting what I feel are better alternatives and the best part is that these are great cars for under 20 grand. You may very reasonably point out say these are not brand new and they’re certainly not convertible, but I’ll argue that they are a much, much better choice.

Now, because this is serious business I’m not gonna focus on any crazy cars, the kind of stuff I’m sure would be more fun than a barrel of monkeys, but wouldn’t really work on a daily basis. So only practical and – marginally – sensible machines with the ability to be pretty decent daily drivers, starting with something on the conservative side.

Let’s imagine that the sports cars/convertible kind of situation isn’t really your cup of tea but of course, you’re not ready to completely give up on life either and you need something that can still allow you some small degree of fun. For your consideration: the W211 E500. It’s a  conservative looking car, discrete but good looking in its own way. The Mercedes has a clever 7 speed gearbox and despite being a V8, it’s actually economical and it won’t make the ice caps melt (that much faster). Don’t wanna be late for those important business meetings? Get one of these, I guarantee you’ll get there in time. Plus with the E500 you’ll be able to drive to the country club with complete confidence, knowing that you’ll probably get to spend the rest of the evening gloating about how your Merc is better than the 55 others in the parking lot and it was so affordable! (you can leave out that part if you want…). Now can you picture yourself driving an SLK? Having to constantly hear that annoying question in every single conversation for the rest of your life: “Couldn’t afford an SL, huh?” Plus, the E will make you look cooler than if you were to drive an S class or a 7 series, and if someone asks you why you didn’t get one of those, just say they’re for posers, smirk, put on sunglasses, do the Isaac double guns and drive away.

Fast (annoyingly limited as every other big German sedan, but still fast), comfortable and decent looking without being over the top. All this for about 18 grand, not a terrible deal. 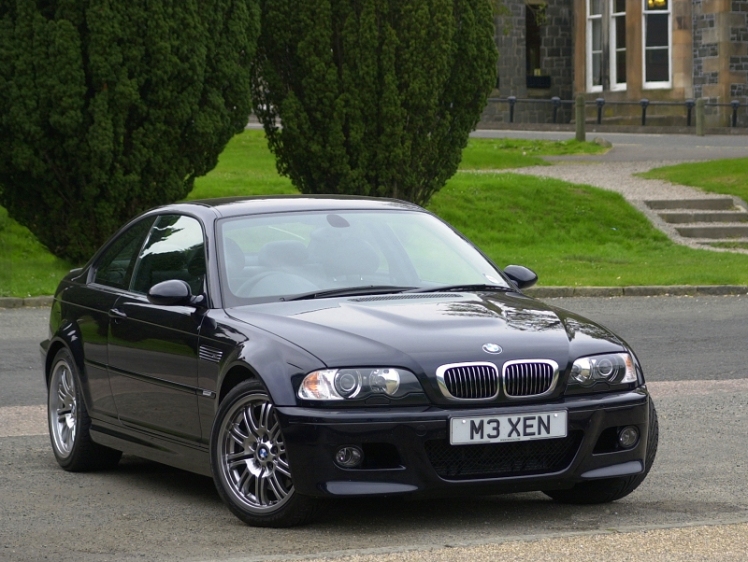 And now for something complete different (pardon the reference). It’s important to remember that it’s possible to find a small, reasonably reliable sports car that is still capable of terrorizing small children (by the way if you’re a dad and you’re thinking about getting one of these, get some damn good baby seats): the 2003 BMW M3 (e46) for instance. This nifty example of Bimmer excellence has all the advantages of being a nice – despite small – family able car when you need it, think school runs, shopping and such, while at the same time having the ability to quite thoroughly  humiliate about 80% of all other cars on the road. Your days of getting left behind at the traffic light by annoying kids in pocket rockets are over! M3s are special and that’s no wonder, after all BMW has been making them since 1986 and that little “M” badge is  worth a whole lot.

The e46 M3 is equipped with a very nice 6 cylinder engine and a great manual 6 speed gearbox (there are other versions, but go for this one). The 330 bhp of the M3 will make you seriously happy, happiness that will only increase when you discover a 0 to 60 time of just  5 seconds. The mechanical witchcraft BMW used is far too complicated to get into now, but if you’re interested be sure to check out a really nice article about all that on “ultimatecarpage”. The bottom line is that the M3 is ready for action and not only in a straight line; maneuverability is a huge asset of these little Bimmers thanks to a lot of clever gizmos with complicated names like “M Dynamic Driving Control” and “Cornering Brake Control”.

Style-wise, you really can’t really miss the M3; there’s definitely some muscle showing, but it’s certainly not ridiculous or over the top, none of those crazy 10 stories high spoilers for instance. It has a real gentlemenlish look about it, very respectable (when stock, we know a few BMW owners do like their…customization process); it’s hard to imagine the kind of psychopath hiding underneath. You just can’t go wrong with this one, there’s no situation in which it won’t fit perfectly. This is what some of the most prestigious automotive publications have to say about it (thank you to the “stevecarter.com” website for the brilliant research):

“Drive it for a day and you’ll be amazed by the immediacy of its responsiveness and by the sheer explosiveness of its straight line performance. You’ll soon start to wonder why anyone else would bother trying to build a rival to such a car” – Autocar

“The selection of mechanical melodies generated by the 3.2 litre straight six engine residing under the bulging bonnet of this ultimate variation on the BMW 3 series theme tops any comparable powerplant that I’ve ever tuned into before” – Top Gear Magazine

“The ride is a delight, look for passengers climbing out with wild eyes and puckered cheeks, or drivers wearing silly grins long after they have parked BMW’s fastest-accelerating M yet”. – Driven

“The people who work at BMW Motorsport won’t settle for second best. It shows in the M3. In the perfection of its form, the fine resolution of its details and the depth of its engineering” – Evo

“This is truly a defining car for BMW. It is closer in driving character to the original M3 and delivers true supercar performance” – AutoCar

Is it necessary to say more? I really don’t think so and for this kind of money (under 20k) you can even get the convertible version if you’re into that sort of thing. Personally, I share Tiff Needell’s view on convertibles, in them you’re always getting attacked by sounds and smells you’d much rather avoid…

Now that we’ve covered the M3, I couldn’t possible go without mentioning one of my favorite cars ever, and probably BMW’s finest achievement to date: the e39 M5. This is just an astonishing ride in every possible sense, and that’s not just my humble opinion, its hard fact.

The e39 was the first M5 to not be assembled at the M GmbH factory, but it doesn’t mean it lost anything in terms of quality. With an amazing 400 bhp V8 under the hood, the e39 weights 3800 hundred pounds, which is pretty great for a car that’s almost 16 feet long.

Regarding performance, top speed is limited (again, if you get one of these please, fix that, just pay to get the damn thing out) because it keeps the big German manufacturers from going into a speed war; 0 to 60 takes 4.8 seconds, and mpg is irrelevant really. If you’re thinking about that for an M5, you’re going about this all wrong.

The M5 is the complete package, I seriously doubt anyone would ever need a better car than this. Going to work every day? The e39 M5 is the car for the job. Want to drive across North America (or any other continent for that matter) in a hurry? It’s perfect for that as well. Just getting from A to B will put a massive smile on your face. I know what you’re thinking, “he said he would be objective about this”; oh I am, and if my word isn’t enough, I’ve taken the liberty of finding some more ammo from the experts themselves:

“The fastest production sedan on the planet.” – Road and Track, March 2000

“… The M5 is as close to faultless as any car I’ve driven. Set the bar as high as you like, this thing will clear it. Unbelievable! – Jeff Karr (Motor Trend)

“… The best and most consistently enjoyable sport sedan the world has ever known.” – Motor Trend, March 2000

“On the track, the M5 is hunkered down and grips the asphalt with confidence and composure. The instant-on electronic throttle response and the precise manual gearbox   will bring a smile to any driver.” – Road and Track, March 2000

“For people who love cars, the M5 is quite simply the most desirable sedan in the world at any price. What more can we say?” – Car and Driver, March 2000

“Simply the best” (obligatory Tina salute, here). The M5 truly is extraordinary; it’s beautiful, charismatic, as reliable as possible for this particular segment, spacious, comfortable and just happens to be able to scramble your internal organs.

It may not be the most economical or the most modern but I dare someone to consider these 3 cars, buy one of the other 2 and then not being filled with remorse for life for not getting the M5. I’m not putting down the Mercedes and the M3, I featured them here for good reasons, but when we talk about cars there’s an important sense of excitement and finesse that the true enthusiasts search for in their cars, something intangible and indefinable but with a massive attraction power, the mythical “X-Factor”, something the M5 has by the bucket load. You can’t help but fall in love with it.