This month we start off with a war machine, a pretty interesting one. A shame it was used by the wrong side during WWII. The Schwimmwagen, quite literally the “swimming car”…Germans and literal names, don’t get me started…shared a basic platform with the popular Beetle but unlike a normal Beetle, if you drive this one into a lake it doesn’t sink. Huzzah! The type 166 was the most produced amphibious vehicle ever with well over 15 thousand being made and now, you can own one. But do you need an amphibious military vehicle? Maybe…how secure are European geopolitics right know? You never know… 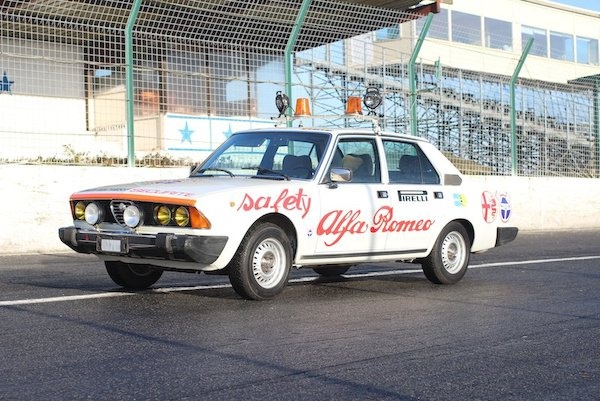 To me, one of the best things during a race is when the safety car comes out on the track. No, I don’t like or hope that pilots get injured but anyone who watches racing claiming not to expect or be interested in the accidents is a big ol’ liar. The safety car is usually so cool and so unique that you can’t help but love the damn things and this one seems pretty special. Performance wise is a basic Alfa 6, but the interesting thing about it is that from 1983 to 1989 it served on the legendary Spa circuit (where it will also be auctioned off). Reportedly the one being offered for sale had an identical twin which has been lost over the years, so this may very well be an absolutely unique ride and with an estimate of just 10 to 15 grand, it’s a pretty cheap one too.

For Sale in Belgium

Two, maybe three years ago I came across a wonderful Fiat Dino for sale. It was pretty much all original and unrestored, but in great condition (being an Italian car from the 60’s of course it needed attention, but it wasn’t a hopeless mess like a lot of similar cars from the period that pop up for sale every now and then). The asking price was around 6.000 euros. Being a starving college student at a time (now I’m just a starving unemployed) I thought to myself “Damn, couple of years from now I’m really gonna kick myself for not being able to get this thing”. And look, here we are! So we all know the story of the Dino name and engines, but what became famous for that whole issue was the 246; few people remember the Fiat which is a bit odd to me, since both the coupe and spider versions are so beautiful…you’d think they’d make a lasting impression, but for many years they flew right under the radar and prices were low. Well those days are gone. The Dino offered for sale here is a 67, which means it has the 2.0L engine; in 1969, the engines were upgraded to 2.4L. Restored recently, it looks absolutely fantastic. Italian charm at its best.

For Sale in the United Kingdom

If you never heard about the Sierra don’t worry, it’s certainly not the best know product of the Monteverdi lineup…it’s not the “best” anything of Monteverdi actually. What it is is a testament of Peter Monteverdi’s ingenuity, something we’ve talked about and praised many, many times here on AV. So what is this boxy sedan all about? Well, under all the bells and whistles the Sierra is actually a Plymouth Volaré…which is actually, in turn, a Dodge Aspen…yeah, not impressive. But that’s what Monteverdi did, he would take boring stuff and at the very least, make it unique with a new look and a bunch of borrowed bits (the Sierra for instance has Fiat headlights and Renault taillights). At over 71.000 euros, this Sierra isn’t cheap but it is unlikely that you’ll ever see another one while driving around in it, so I guess that’s something…plus, you do get a sweet 8 track stereo. Score!

For Sale in Switzerland

While there are a lot of attractive cars, few can truly be called beautiful. Fewer still can be described as stunning and only a handful will legitimately de able to take your breath away. This is one of those cars. It isn’t the rarest of Alfas, nor is it the most expensive but Lord it is an achingly gorgeous thing, especially in black.

Earlier this month AV featured Once Upon a Time Regina Mills’ 560SL Mercedes. It’s nice, but not this nice…straight from Brabus (heavy weight Mercedes Benz tunner) after being showered with care and attention, this 560 looks like it just rolled off the assembly line…and it comes with a price tag to match.

Now, in the past I may have said some harsh things about replicas…ok, harsh may be a bit of understatement…but lately I’ve been learning to tolerate them a bit more. Don’t get me wrong, still not a fan and still very much an “original is always best” kind of guy, but I’ve been listening to Jay Leno talk about his Pur Sang replicas and enforcing the notion that there’s a clear and important distinction between replica and kit car; long story short, I’m keeping a more open mind. So in that spirit, AV is featuring this: a 2008, 1966 GT40 MKII replica made by Shelby to commemorate the 85th birthday of Mr. Carroll Shelby and the 1-2-3 victory at Le Mans. This special (let’s call it), nostalgic recreation was available in the original colors of the 66 Le Mans cars, the number 2 one being the prettiest one (following the time tested rule: everything looks better in black). These commemorative Shelby cars were essentially rolling chassis and you had a choice of engines; the one featured on this article has the “basic” 427, good for well over 500bhp which let’s face it, you’d have to be a hell of a driver/pilot to fully utilize while driving this thing. No, it’s not original but it is extremely good looking and not something some guy threw together in a shed in the middle of nowhere. It’s a specialty product made with specialty parts put together by a big company which granted, doesn’t have the best track record to infuse much confidence on your purchase (and this coming from a huge Shelby fan)…but in the end, you should be ok.

For Sale in Belgium

If you’re still not convinced though, there is an alternative. RK Motors of Charlotte North Carolina, well known for their massive stock of nothing but the very best of vintage muscle, hot rods, prestige cars, sports cars and everything in between, has acquired the original number 2, 1966 Le Mans winner GT40 and the goal seems to restore it in time for the big 50th anniversary of the historic victory at the 2016 Pebble Beach Concours d’Elegance. So you can always have your check book ready for that. How many zeros can you add to a number before it becomes impossible to read? Cause you’ll need about that many.