We all know that a 70’s Aston V8 is one of the most beautiful, most amazing cars you can ever get. Sit behind the wheel of a – let’s say – 77 Vantage and you’re guaranteed to be the coolest kid on the bloc…on a radius of about 10.000 blocs. However, this month we’re featuring something much rarer than a V8 Vantage coupe, something that gets us talking about another mythical name connected with Aston: Lagonda. Automotive Views has shared a whole whole lot of love for the terrible 1974 Lagonda, but today we’re all about another beast from the same year. Meet the V8 Lagonda! Isn’t it something…we sure think so! One of 7, this amazing ride isn’t Aston’s first shot at a badass sedan. Before, the company had come up with the stylish, aggressive Rapide in 61. In fact, on the front you can see the homage to the à la BMW kidney grill from the Rapide.

So why only 7 of these “I’m so tempted to drive it till the wheels fall off but it costs a damn fortune” rides? You’ve gotta keep in mind just how screwy the world was when these things showed up. The oil crisis had killed a lot of the public’s appetite for big engines and super fast cars. Bad news for folks back then, great news for whoever owns one today! The fact that they’re so rare obviously means that they’ll be very, very expensive. Let’s take a look at the one being offered for sale. Spotless by all accounts, this particular example, despite not being the ludicrously rare manual version (only two of those saw the light of day) has a hell of a party piece. The owner thought “this is fast, but not heart attack inducing fast. Let’s change that”. As such, he upgraded the 5.3L V8 to a 7.0L, pumping up the HP from 320 to 480 and producing a ridiculous amount of torque in the process.

Now, the really interesting bit about this particular Lagonda is that it has been up for sale before. Back then it fetched an impressive 337.000 British pounds, about 480 grand for our American friends and 420 for us here in the old continent. Now the price tag is more substantial…way, more.

For Sale in the UK

Very rarely is a car design an all-round winner. Sure, there are always very nice looking rides, but there’s usually a detail which turns out to be a bit more controversial, a proportion that just isn’t quite right. Geoff Lawson’s XK is one of the rare examples of absolute perfection. Just look at it, this is a 15 year old car that looks as fresh (or fresher) than anything coming out of the assembly lines today. With all due respect to the extremely talented Mr. Calluen, a man who gave us some of the most drop dead gorgeous rides ever made such as the DB7 and DB9, the fallowing generation of XKs just didn’t feel as harmonious or appealing as its predecessor. Proof of just how complex and expertly shaped the looks of the 1996-2006 X100 XK are is that no matter how many times video games companies attempted to replicate it digitally, it never looks right because the proportions are so delicate.

But enough about form, let’s talk function. How good is the R version of the XK? It’s excellent.  Featuring Jag’s very nice but conservative AJ-8 V8, it’s a bit counter intuitive to think just how good these early XKRs are because they’re not that powerful by today’s standards, even supercharged (about 370bhp). They weigh a metaphorical ton which translates to almost 2 of the literal ones, and they have no interior space whatsoever which means you’ll be cramped all the time.

But in the end, none of that matters because these really are a force to be reckoned with and so much more than the sum of their parts, that’s what’s truly extraordinary about them. Fine and delicate in appearance, graceful and agile in performance, but packing a hell of a powerful punch.

Think we sold it enough? Well a couple of drops of rain in our own parade. The one being offered has the mileage and the scars to prove it, which means small issues here and there paint-wise and rims in need of refurbishing. The biggest thing with this extremely red, extremely sexy XKR though is the interior; the trim is hideous, there’s no other word for it. It comes across like a horrible camo, like something you’d find in one of Ted Nugent’s cars and no one wants to ever be reminded of Ted Nugent for any reason whatsoever, especially not while riding around on your awesome Jag. On the plus side, it is a hell of a lot of car for very little money, just make sure everything’s in order, with special attention to flaws in the infuriating “limp home” mode.

Over the course of its long history, Mercedes has come up with some pretty damn impressive cars; the W100 600 for instance immediately comes to mind. However, in the coupe department, we’re having a hard time thinking of anything as big and imposing as this, the 300S. Now, when we say big and imposing we don’t mean disproportioned and ugly, quite the contrary. You’d be pressed to find another coupe as graceful yet shapely and voluptuous as this one. It really is an extraordinary creation. Only a little over 300 examples of the W188 Coupe were ever made, which – again – means they’re rare and expensive. The one being presented for sale is original and unrestored, which is the same as saying that it will need a lot of TLC to bring it up to pristine condition. But hey, don’t get us wrong, if you want to rock it as is, patina and rust proudly on display we salute and applaud you Sir/Madam because it looks absolutely fantastic! However, keep in mind that a fully restored Coupe will retail for well over half a million dollars so, you know…decisions decisions.

On a side note, Its mind boggling to realize that these things are contemporary to the 300SL Gullwing because they do look like they belong in totally different eras. Guess it was just a different kind of car to a different kind of client. The 300S Coupe follows a Mercedes tendency that was kept alive and well in the huge CLs of recent years and which is still around today in the S63 AMG Coupe. The formula is refined, it’s of the time, sure, but the principle is the same

For Sale in the Czech Republic

Now here’s a name you don’t hear often, Glas. Most people have no clue what it is, but productions numbers aren’t as low as you’d expect, with over 13 thousand having been made. So what exactly is a Glas? Well, let’s start at the beginning. The Glas company started making farm equipment back in the late 19th century; then they upgraded to sewing machines and of course, the next logical step (?) after that were cars. The company came up with the tiny, funny looking Goggomobil but later upgraded to sleek coupes designed by Frua.

The bit that interests us today though is Glas under BMW’s rule (from 1966 on). The looks of this particular model were the same as when Glas was independent, just a slight change to the name in order to include “BMW” in it. The engine was a 2.962cc V8 good for some performance, but nothing too crazy.

The real kick on these is how they look. Nicknamed the “Glaserati” due to the similarities between Frua’s work for Glas and the Italian manufacturer, the 3000 V8 does look exactly like a Series II Maserati Sebring with a slightly raised roofline. It really is astonishing how close the designs are. The front end has some funky touches that turn it almost Japanese, with the fender mounted mirrors and the square headlamps, but otherwise the “Glaserati” nickname is definitely appropriate. If you’re on the market for something unusual and with a good story to go along with it, this may be right up your alley.

Arguably the greatest triumph (with the “Aileron” a very close second) from that big bucket of Dutch looniness formally known as Spyker, the C8 Spyder is one extremely good looking ride. The proportions are beautiful and the interiors are insanely complex and luxurious; the shifter alone is worthy of being a museum piece! Usually we’re more team coupe here on AV, but the Spyder version of the C8 is just so freaking perfect that we can’t help but love it unconditionally.

So besides being a ray of sunshine in our lives, why is this particular Audi V8 powered C8 special enough to have our attention this month? Well, this is a new car…and we do mean brand spankin’ new! Built in 05, it has never been registered and – wait for it – has 28km on the odometer. WHY would you buy a Spyker and not drive it? We’re so confused right now!

Ok, fine…we kind of get the play, appreciation and all, but…no, just…no. Drive your supercars, people!

While the Spyker we just took a look at is a scientifically crafted machine for speed and performance, this was thought of by fat, cigar smoking GM executives to be a rolling living room. Is it fast? Hell no! Does it handle? Like a beached whale! Is it good in any way whatsoever? Glad you ask. Yes, it’s truly great…in its own way. First of all, let’s start – as usual – on looks. Gone are the crazy fins and mountains of chrome from the previous two decades. The Series 75 looks sober, but elegant. Let’s not forget the 1966-1970 Series 75 is a Bill Mitchell product, the gentleman responsible for the Mako Shark and the Stingray. Sure, it’s the size of RMS Queen Mary 2, but it doesn’t look clumsy or exaggerated.

If performance is what you seek, this really isn’t the thing for you, but if you value making a statement and being able to carry 35 members of your immediately family at once in great comfort, this Cadillac should totally be your next purchase. And speaking of comfort, just look at those amazing interiors! Like something you’d find in the very best of affordable houses of ill repute.

What is that? Gas costs? How much to fill up, you ask? Who cares! The world is fine, gas is cheap, the Middle East is a peaceful region. Don’t think about it.

A 4 door Ferrari. *Gasp*. One of one, built as a Pininfarina gift to itself (50th anniversary), the car remained as a design exercise and deprived of powertrain until the early 2000’s when an engine/gearbox combo from a 400GT made its way into the Pinin.

The car has already been up for sale but failed to reach its one million British pounds price tag. Let’s see if some deep pocketed enthusiast steps up to the plate now.

For Sale in Italy 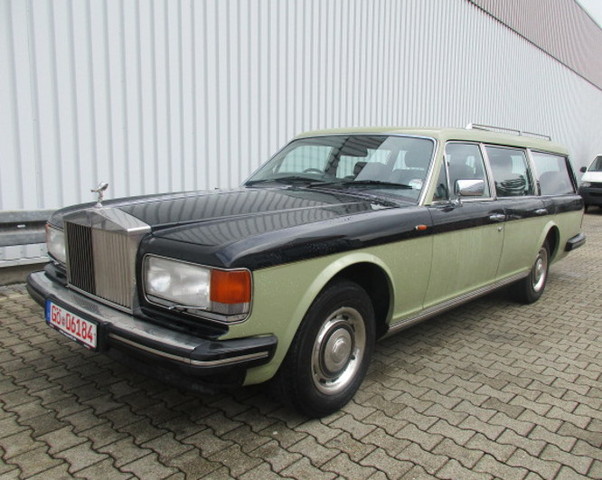 Frankly, we were gonna fangirl allllllllllover this but we won’t…I mean, we could spend forever talking about how GLORIOUS a Silver Spirit Estate is (forgetting that it’s a decommissioned hearse), but no need. It’s clearly the most epic thing on this list and it breaks our heart that we’re not buying it right now…

For Sale in German