In 24 separate occasions, dozens of cars thundered throughout Italy, on public roads, as fast as possible (and sometimes, beyond that…), covering 1000 miles from Brescia to Rome and back again. It was an extreme, nonstop, danger filled event that claimed almost 60 lives during its original 30 year run.

Standing tall with the Targa Florio and Carrera Panamericana as the undisputed royalty of road racing, the Mille Miglia first took place in 1927. That year, Ferdinando Minoia and Giuseppe Morandi claimed victory thanks to the spirit of endurance of a fragile looking Officine Meccaniche model 665S, a small car from an equally small Italian manufacturer. The Mille Miglia became a matter of national pride for Italy and her people. Alfa Romeo is the undisputed manufacturer’s champion with 11 wins, followed by Ferrari with 8. And, unsurprisingly, the greatest road race ever ran was only conquered by foreigner drivers 3 times between 1927 and 1957, the year in which – to the public and official’s eyes – the risk finally outweighed the rewards.

To put the driving conditions of the Mille Miglia into context, it might be useful to remember the WRC attendance in the 80’s. Thousands of people on the sides of the road – or on the actual road – all trying to get the best possible view of the action. Kids running across from one side to the other and in some cases, playing a very dangerous game of chicken with the extremely fast cars. Tight streets, even tighter corners, wild and domestic animals wondering around, daredevils, the exuberance of youth, the sheer idiocy of some, the innocent enthusiasm of others and just plain bad luck sometimes…it would all come together to make for a million different recipes for disaster. 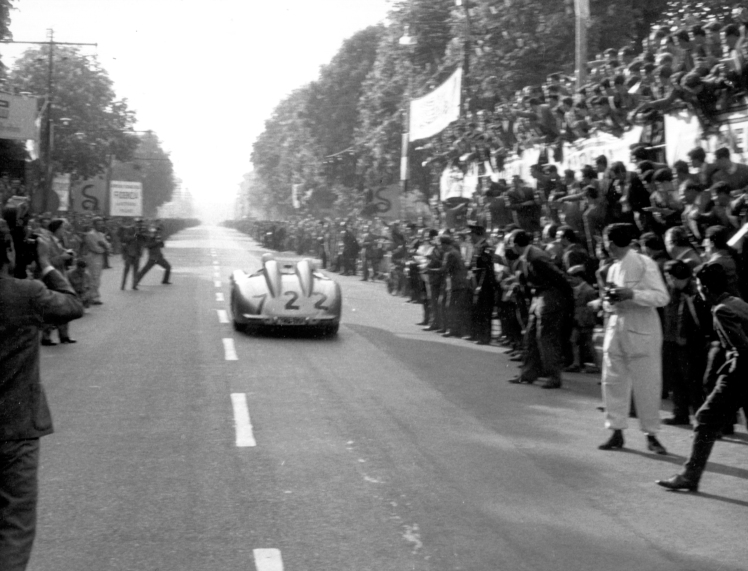 It had been difficult putting the 1957 race together after the previous year’s event claimed a toll of 6 lives. However, the race was held and Alfonso de Portago was pushing his Ferrari 335 S. He wasn’t supposed to be competing, he didn’t want to compete, he had no experience in the grueling race…yet he continued to push hard and after delaying a tire change, the inevitable happened. The blown tire catapulted the Ferrari into the crowd clear past the first lines of spectators curiously enough, the ones that wanted to be closer to the action…and to the danger. When the Ferrari landed, de Portago and his co-driver Edmund Nelson were reportedly cut in half. The crash killed 9 other people, 5 of which were children. 20 others were seriously injured. The same year, Josef Gollgens crashed a TR3 into a wall in Florence; with the death off a motorcycle police officer, the 1957 edition of the Mille Miglia had claimed 13. 1955’s Le Mans horrific tragedy was still vivid in people’s minds, so the events of 57 were more than enough justification to mark the end of the historic Italian race. (For a better understanding of the 1957 Mille Miglia accident, William Rospigliosi’s article for the May 20th edition of Sports Illustrated is a great read)

The Mille Miglia would eventually make a comeback in 1977 and, despite not being the extreme, incessant trial by fire that it was back during its original run, it still retains a lot of the aspects that made it so very special. The immense pride the race awakens in its country and spectators, the fact that it gathers so many of the greats in the automotive world, the freedom of open road racing – so rare nowadays in it’s genuine form – and perhaps, most importantly, the demonstration of greatness from the machinery that took and continues to take part in the event. Today, cars (models) which participated in any of the editions from the original 30 year run are eligible to take place in the Mille Miglia again. In what other context would you see a Maserati 200SI or a Jaguar D-Type blasting down a public road? 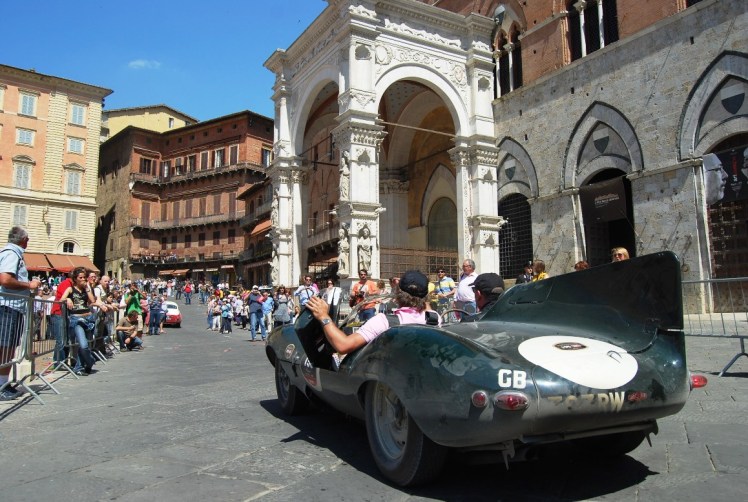 This year marked the 90th anniversary of the greatest road race. 450 cars participated in the now 4 day event, including entries from the Alfa Romeo Museum, BMW Group Classic and Mercedes Benz Classic such as the 1938 6C 2300 Mille Miglia, 1937 328 Touring Roadster and 1952 300SL W194. The victory however belonged, for the second consecutive year to the – appropriately – Brescia couple Andrea Vesco and Andrea Guerini with a 1930 Alfa Romeo 6C 1750 Gran Sport Zagato (report and gallery at Sportscardigest.com).

To celebrate the Mille Miglia’s 90 year run (if you dismiss the hiatus), let’s take a look at 3 of the all time favorite winners; iconic cars that earned their way into the history books and people’s hearts.

Between 1939 and 1946 the Mille Miglia was not held. The cause is simple to guess: WWII. In 1947, the event came back with Italy (Italians) looking forward to put the horrors of war and humiliation of defeat behind them. Renamed the “Franco Mazzotti Mille Miglia Cup” in honor of one of the founders of the event, it wasn’t at all easy to make the race happen; the war had inflicted severe damage to the country, both in terms of industry and public infrastructure (roads, bridges, etc). Also, the limitations on fuel and tires were an issue. As grandprixhistory.org‘s Dennis David stated:

“Only through persistent negotiations were special compensations extracted from the fuel companies and Pirelli, the supplier of racing tires. Every entrant was given a full tank of gas as well as five new tires. Upon hearing the news the list of entrants grew to 245 cars. The Italians being ever clever, ninety of these “entrants” promptly drove home before the race with their shiny new tires and full tank of gas!”

Clemente Biondetti and Emilio Romano, pilot and co-pilot of a stunning Alfa Romeo 8C 2900B Berlinetta Touring took the victory in 1947. Biondetti became a Mille Miglia veteran, winning in 1938, 1947, 1948 and 1949. The car itself was a proud member of the immensely accomplished 8C family. 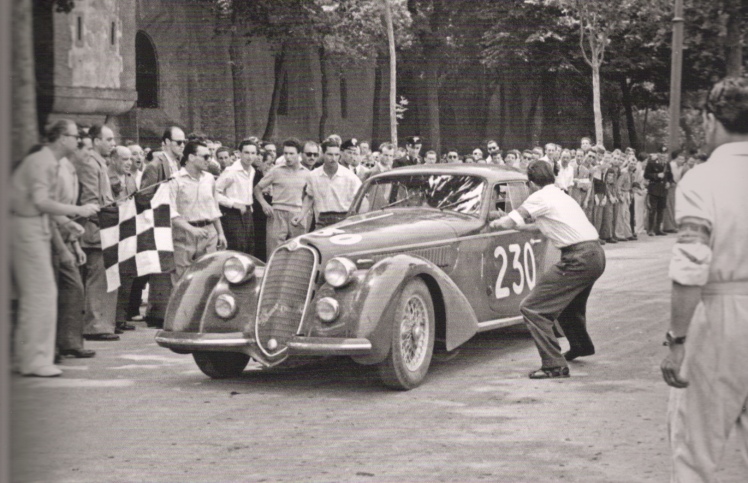 With a supercharged inline 8 engine refined in racing and slightly detuned for the road, the top of the range Stabilimenti Farina and Touring 8C models were (are) some of Alfa Romeo’s most beautiful cars ever, the pinnacle of post-war coachwork.  Built to maintain dominance at the Mille Miglia, the 8C 2900B certainly accomplished Alfa’s objective before Ferrari stepped up its game, dominating the fallowing years of the competition. A triumph of the period’s engineering and achingly beautiful, the #230 Berlinetta remains as one of the most beloved and visually striking cars to take the victory at the Brescia – Rome – Brescia run. 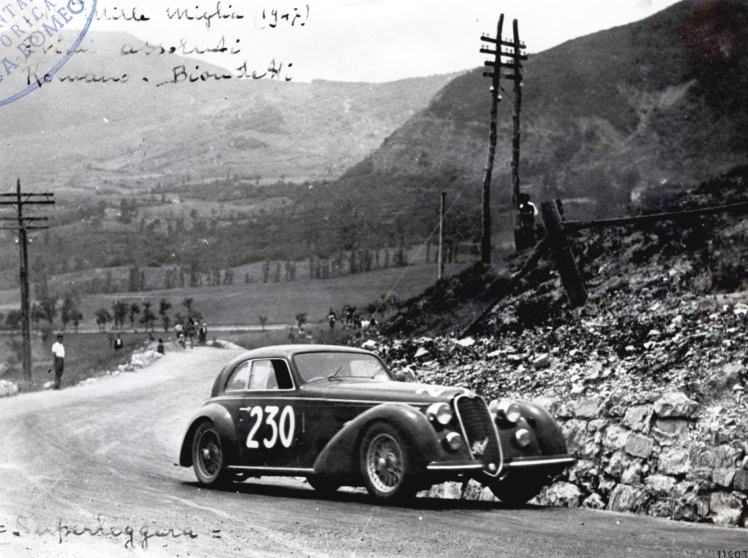 Crashing Ferrari’s party in 1954, Lancia won the Mille Miglia with its D24 Spider, a striking barchetta with a 265bhp V8 under the hood and the great Alberto Ascari behind the wheel. Ascari is a racing legend in his own right. Before making the change to 4 wheels, he was already pretty accomplished in motorcycle racing and when he decided cars were worth a shot, he became F1 World Champion…twice. 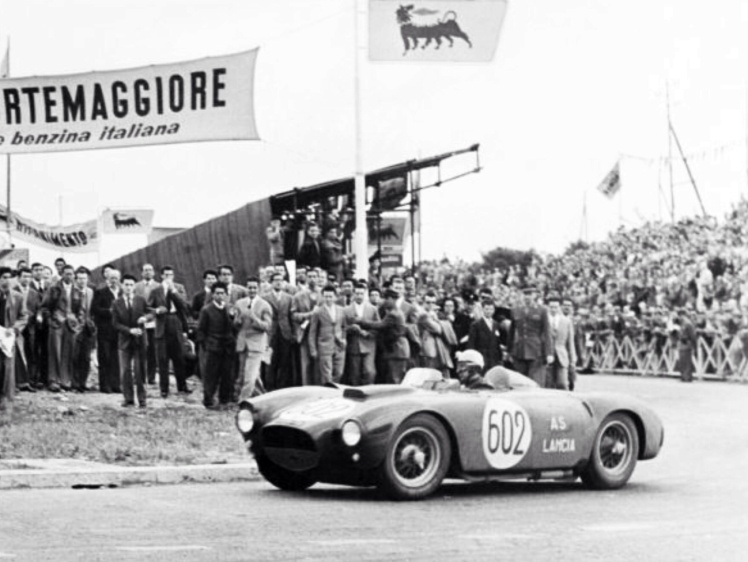 Before 1954, Ascari had already entered the Mille Miglia 4 times, but failed to finish every single one of those races. This time however, the careful Ascari and the accomplished D24 – which also won the Targa Florio the same year and which had already won the Carrera Panamericana in ‘53 – didn’t give the competition a chance. All the front runner Ferraris eventually retired due to a multitude of complications and the #602 Lancia easily took the win over everything else after that. Lancia had won its first and last Mille Miglia. 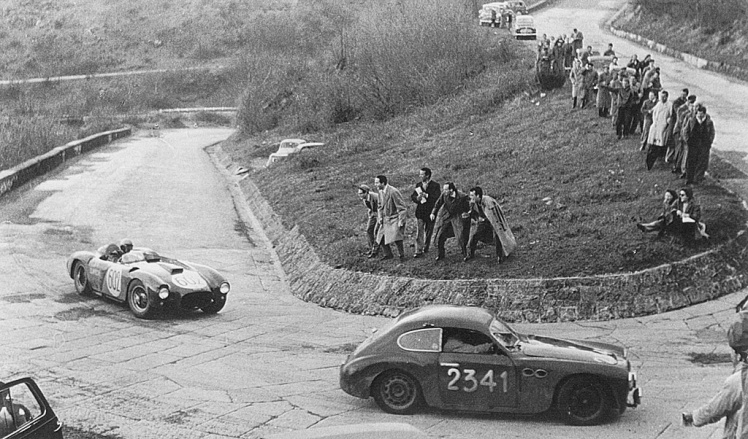 The following year, Alberto Ascari dies in Monza. 4 days before his death, Ascari was leading the Monaco Grand Prix – also at the wheel of a Lancia – when he missed a chicane and went flying through the barriers and into the sea; he escaped the incident with a simple broken nose. At Monza, Ascari was visiting a friend and fellow driver, Eugenio Castelotti, while he was testing a Ferrari to enter the 1000km Monza event. Ascari decided to give the Ferrari 750 a try himself. The car skidded for reasons unknown and flipped twice, throwing Ascari on the asphalt, killing the World Champion.

Finally, perhaps the most emblematic of the Mille Miglia victors: the Mercedes Benz 300 Sport Leicht-Rennen W196S; 300 SLR for short. Calling the SLR a “legend” doesn’t seem nearly strong enough to properly convey what it actually is. With a straight 8 engine derived from Mercedes’ Formula 1 W196, the SLR debuted in 1955 at the Mille Miglia, taking first and second place at the event, and grabbing first and second at the Targa Florio as well that same year, unsurprisingly winning the 1955 World Sportscar Championship. Juan Manuel Fangio and Stirling Moss were Mercedes’ top men at the 55’ Mille Miglia; Fangio left Brescia at 6:58 AM, he’d eventually finish 2nd and Sir Stirling Moss left at 7:22 AM, immortalizing the 722 number which would eventually even come to be used for a special edition of the Mercedes McLaren SLR. Another special edition of the same car was actually named “Stirling Moss” and features a body style reminiscent of the W196S SLR. 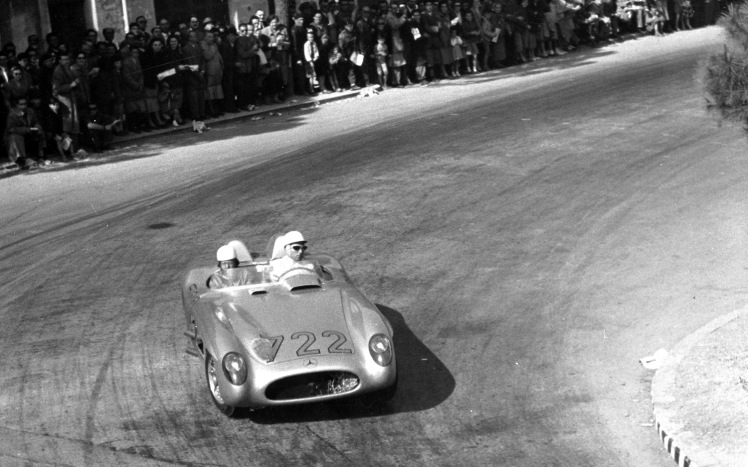 Moss would end up taking a mind boggling victory with a run time of just 10 hours, 07 minutes and 48 seconds, maintaining an average speed of 99 mph…on public roads…in the 50’s…non-stop. Moss’s co-driver, Denis Jenkinson used notes he had previously taken about the route, a system which would shape the so called pacenotes used later and to this day in the WRC. A simple box with a roll of paper, Jenkinson would unscroll it as needed, following the directions written down.

The SLR would have certainly continued to have a brilliant racing career, but despite the auspicious start, 1955 would end up being a deeply tragic year for Mercedes Benz (and for racing in general). 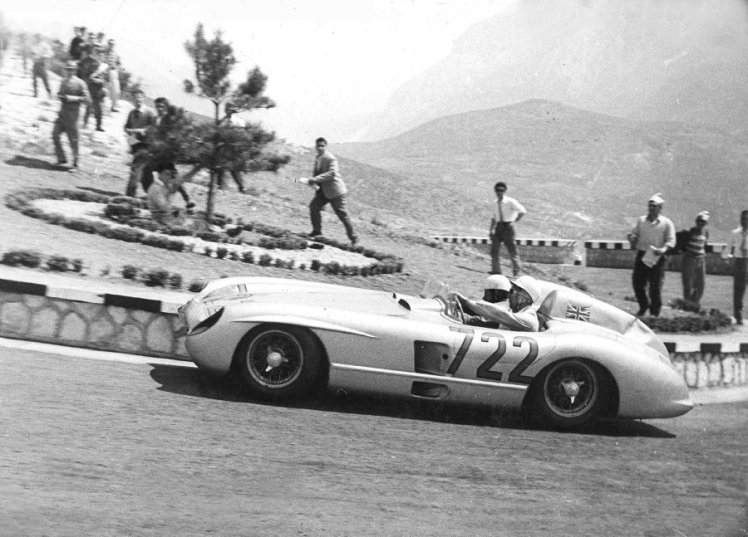 At Le Mans, driver Mike Hawthorn cut off Lance Macklin in order to make it into the pit lane; Macklin, in turn, was forced to cut off Pierre Levegh, a Mercedes driver. Levegh crashed into Macklin’s Austin Healey, sending the Mercedes flying off track, slamming into concrete and disintegrating on impact. Levegh was  killed immediately and heavy components like the engine and suspension of his Mercedes were hurled into the crowd, crushing several spectators while the large bonnet reportedly decapitated several people. The car burst into flames, spewing magnesium embers on the crowd. 84 people died, well over 100 were injured. The horrific event ended Mercedes’ racing program for almost 40 years and marked the forced retirement of one of the company’s  greatest models.

Racing often becomes as much about the tragedy as it does about the glory, unsurprisingly since risk is such a big part of the equation. The Le Mans crash proved that the Mille Miglia wasn’t dangerous because it was a road race, but simply because it was just that: a race. Despite not being around in its original, raw format, what truly matters is that it is, in fact, still around, that you can sign up your classic car – and there is a long, long list of models which are eligible for participation – and for 4 glorious days, you can experience a taste of something that would otherwise be lost forever. So happy birthday, Mille Miglia and ciao Brescia, see you next year.