Over the last few weeks, all the automotive media outlets have been buzzing with glee over a very, very special AMG and AV…well, it’s about to do pretty much the exact same thing, really. But what did you expect when there’s a Mercedes Benz S123 500TE up for sale? A 500TE. For sale. As in you can actually pay for and own it. For real. It’s insane! The concept of ownership over one of these it’s like if someone went to the Louvre, saw the Mona Lisa, decided “yeah, I think I’ll have that”, handed a pile of cash and got to go home with it. But 1) is this wagon the real deal? And 2) if not, would you really care anyway? 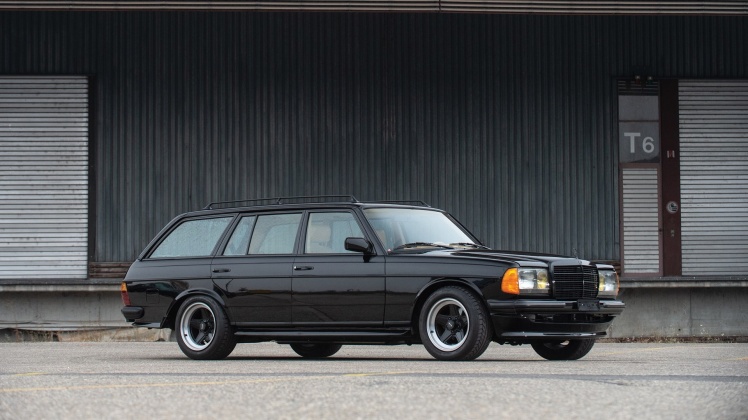 Regarding the first question: is it real? Well, it’s complicated. Classic AMGs are a never-ending bottomless pit of debate over what is or isn’t the “real deal” and we’re certainly not gonna tumble down that particular rabbit hole today; instead we’ll focus on the listing itself which says that this 500TE was probably “built in period by either AMG in the United States, or by someone who had intimate knowledge of Mercedes-Benz and AMG products at a time when few people would have had such knowledge outside AMG”. See what we mean about the “it’s complicated” aspect? In summary, one assumes this thing was put together back in the day by folks who knew what they were doing, probably AMG people. 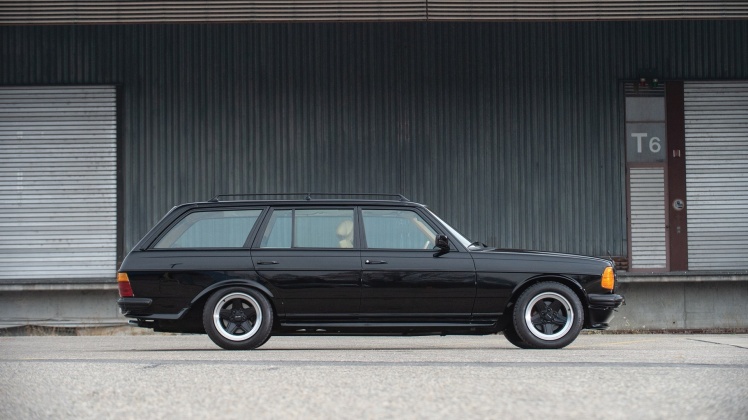 Regarding the second question: are the unknowns enough to keep you away? Objectively, even if it’s not an Affalterbach AMG, would it take that much away from a great looking and seemingly very well achieved conversion? This depends on your personal views on originality, if your goal isn’t simply resale for profit (shame on you if it is, the classic car market is already tough enough) and how comfortable you are with a little mystery in your life. The auction description mentions that the “early history is not known” for this wagon, just simply that it was discovered by a California based enthusiast. This doesn’t necessarily mean that AMG or AMG USA didn’t convert it. Maybe the records were simply lost or never kept in the first place. It’s extremely difficult in some cases to determine what AMG did and when they did it because in the early days, record keeping wasn’t anywhere near their top priorities. In fact, AMG’s records were so bad that no one can say for sure how many W123 cars originally got the coveted 5.0 V8 engine swap treatment. Reportedly five: 2 sedans, 2 wagons and 1 coupe but there’s no verifying that 100%. If we’re in fact dealing with five and only five original 5.0 conversions, that’s not really surprising because it was a very expensive swap to order, the equivalent to over 33.000 Euros (almost 38.000 USD)…in 1979! When the W123 was launched just a few years before, the more expensive stuff like the 280s were priced at – roughly the equivalent to – 12.700 Euros (or about 14.500 USD), so to pay more than double that to hot rod the thing…it just didn’t make sense for the vast majority of the clients. 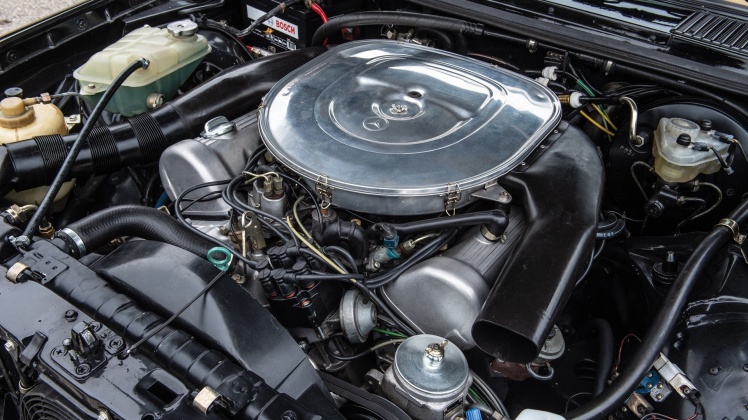 Now, despite the early life of this 500TE being a mystery and the fact that it being “real” or not is up for debate, if nothing else and in the very worst case scenario, this would be a mainly complete, highly desirable and period correct AMG conversion (although we don’t believe that to be the case). Almost all the goodies you could get are there; up front, the M117 5.0 V8 with “tubular headers, downpipes, secondary oil cooler and motor mounts custom designed”, an engine which apparently materialized out of thin air because it can’t be matched to a chassis. Inside, a stunning leather interior complete with AMG sport wheel and big, beautiful Recaro C Classic seats. Funny enough, more common stuff like the AMG speedo and thick AMG floor mats appear not to be features on this example. On the outside, the fabulous AMG body kit and blackout treatment, complete with the stylish AMG pentas give it a killer look that would charm any car enthusiast. 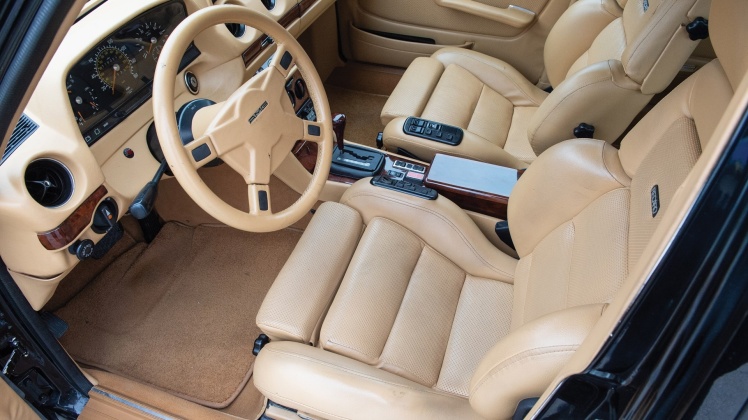 The S123 500TE, a legitimate period AMG in-house conversion, is the undisputed queen of modified wagons. Yes, the Hammer is amazing and there have been a lot of fast wagons since, both from Mercedes and other manufacturers, but the 123 is OG. For coach built stuff it would be a way, way longer and much more complicated discussion over who would snag that title but for modifications and conversions, there’s no beating this formula; it started with arguably the finest Mercedes platform ever built – yes, we considered the W100 before saying that – in its least sporty reiteration and then transformed it into an expensive, uncivilized beautiful monster. We’ll always be overwhelmed by the sheer magnificence of the concept of a V8 powered 123 wagon. 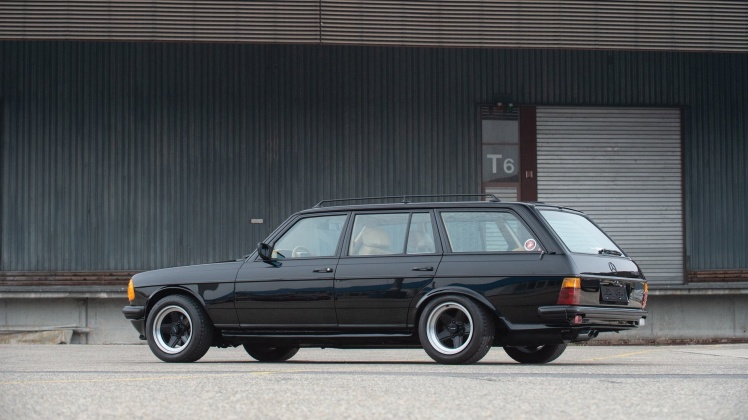 Getting back to the particular example that RM Sotheby’s will make available to the public at the upcoming Essen sale in April, there are a bunch of questions marks on it but if we were to gamble on its history, a US AMG conversion from back in the day does seem like the most logical bet. If it was more recent work, the builder would have probably gone all out and not have missed the little extras we mentioned earlier; it’s likely that someone way back when just didn’t tick some boxes on the options sheet. The rims are still giving us pause because the markings that should be there appear to be missing and there’s a lot to ask about the yellow lights, but it’s impossible to say more without a close inspection we’ll leave further consideration to the vintage AMG experts anyway because we’re certainly not that. 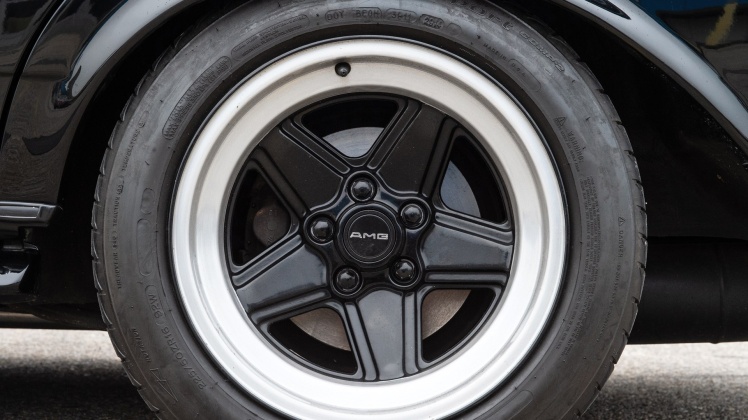 It will be extremely interesting to see how much this beautiful thing brings at auction. With an estimated price of 60.000 to 70.000 Euros (between around 70 and 80 grand, US) it won’t be crazy money if it stays within estimate. And if that does end up being the case, someone is gonna have the chance to drive something properly unique and stunning for not an astronomical amount of money and isn’t that what it’s all about, the experience and the way it makes you feel? Plus, getting the queen of hot rod wagons at a discount might just make you want to go out and enjoy it more.