If I were to ask you to think of the term “tire testing” your brain probably wouldn’t be flooded with any kind of exciting imagery. I know mine sure wouldn’t…personally, all I could think about when I took this little exercise myself was that there’s probably a lot of very clever, rigorous and scientific machinery for the job. Update: I just Googled it and there is. You see, the problem is that we’re living in a boring time for the fascinating field of tiretstology (no, I definitely did not just make that word up, it’s been around since at least 1888, it’s on the dictionary and everything…no need to check, take my word for it…ok fine it’s fake, you happy? Sheesh!); in the 1970’s Michelin needed to put its truck tires through the paces but was concerned about safety since tall, heavy vehicles aren’t exactly graceful when their tires blow up and shred into a million little pieces at high speed. To diminish the risk, Michelin came up with a test vehicle that just happens to be one of the coolest, most extraordinary things ever put on wheels…lots and lots of wheels.

The Poids Lourd Rapide (PLR) or as it got nicknamed, the “Mille Pattes” (centipede) is a heavily modified DS. And when I say heavily modified I mean it’s a seriously out there kind of ride. If the regular DS already looks like a space ship, the PLR is the souped-up, alien F&F version of it. It took 2 years of conceptualization and one year of actual build to get the PLR on the road and that’s not surprising when you take a quick look at the specs of the thing. It measures 7.30 by 2.45 meters (that’s over 23ft 11in long by a little over 8 feet wide for our American friends); it has 10 wheels off the HY van, 6 on the back for traction and 4 at the front for steering; it carries two 90 liter fuel tanks; and, on the back of it, you’ll find two 350 Chevy engines because more of everything is always best. 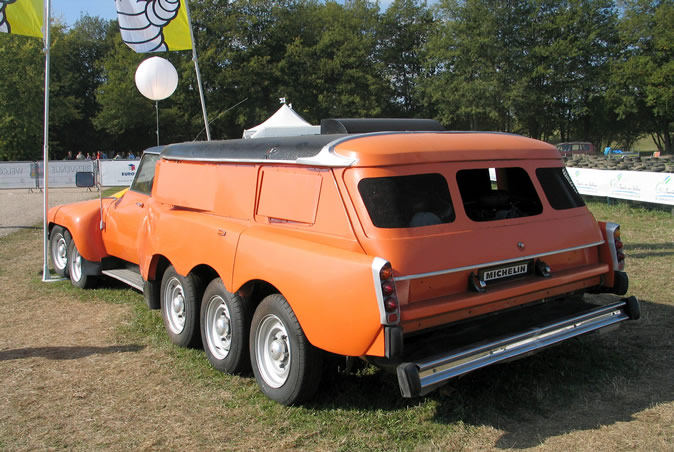 The really cool part is that as mad as the PLR is, the parts for it are stock Citroen stuff, they’ve just been set up a little differently and adapted. The overabundance of wheels in the “centipede” aren’t the ones that would actually test the tires. An 11th wheel on the inside of the vehicle was used for that particular job. The special structure set up on the PLR could apply 2000 to 3250 kilograms of simulated load to the wheel/tire combo. The test wheel was powered by the left side engine while the right one would power the 6 rear wheels of the “centipede”. For security reasons, the left engine and test wheel could be stopped in just 3 seconds should anything go wrong and the driver was, of course, isolated from the “test chamber”. The PLR could run without its side door in order to allow for direct observation of the test wheel/tire from a chase vehicle. By making something as big and wide as a truck but with a much lower center of gravity, Michelin eliminated the risks of a serious accident while tire testing, pretty clever.

The “centipede” wouldn’t run at its – limited – top speed (which would be about 170 to 180kph; 105 to 111mph) which is a shame because personally I’d love to watch what is basically a 10 ton DS Safari running at that speed, but you take what you can get. Speaking of which, here’s a video of the monster in motion for your enjoyment:

Today you can see the PLR getting some well deserve r&r at the Michelin museum in Clermont-Ferrand, France so pay it a visit if you can.